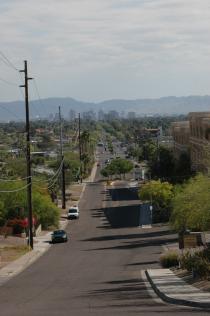 (Mark Brodie/ KJZZ News)
Jeremy Vasquez owns a gardening company in Sunnyslope and is on the board of the Sunnyslope Village Alliance.

Over the past few weeks, we’ve been road tripping up Central Avenue in our series “Central, PHX.” We started at South Mountain and made our way through Downtown, Midtown and North Central. And now we find ourselves at the end of the road. Literally.

Today we’re in Sunnyslope, between Northern and North Mountain where the continuous part of Central ends.

"There’s this innate push and pull of different economies of people coming together and celebrating life and celebrating place in a very beautiful way," said Caroline Lobo, president of the Sunnyslope Village Alliance.

Lobo has lived in this neighborhood near North Mountain, just off Central, for about 15 years. She’d like her area to include more of the walkability and open space neighborhoods to the south enjoy.

"Since it’s such a diverse community, I think it only helps to connect this gem to the rest of the community in a pedestrian-friendly way that will bring many more people to enjoy the natural beauty we have around here," she said.

Lobo said North Mountain has great hiking trails, but she’d also like to see the Bridle Path that lines Central south of Sunnyslope continue north to the mountain as a way to further beautify the area.

This northernmost section of Central also has something in common with the one farthest to the south. Like the neighborhood around South Mountain, this area has both very large, expensive homes and very small, inexpensive ones.

"I do love telling the young people today how much we paid for this house and they can’t understand it," said Connie Kreamer, who has lived with her husband Jim in their 1,300-square-foot house since it was built in 1959.

Kreamer said Sunnyslope doesn’t have the world’s greatest reputation and that’s something you hear from people who live and work in the area.

"The typical reaction is, ‘You live in Sunnyslope?’ or ‘You work in Sunnyslope?’ And I say, ‘Well, come and see what it’s like today,'" said Jim Mapstead, a Sunnyslope resident and business owner. "And when people come here they see a stark difference from what they remember it from decades ago."

Mapstead owns Accurate Signs and Engraving on Central just south of Dunlap. And the building he’s in may be a good case study about Sunnyslope. Next door is a barbecue store, an auto parts shop and a wine bar.

"If somebody would have told me 20 years ago that there would be a wine bar on Central Avenue in Sunnyslope, I would have looked at them like they were on drugs, quite frankly," he said.

But Mapstead, who’s on the Sunnyslope Village Alliance Board of Directors, said things are changing. He said the neighborhood has worked with the city on issues like graffiti removal and clean-ups. And it’s starting to pay off.

"People are making significant investments because this neighborhood has changed over the years," he said. "And it’s not what it used to be."

About a mile away from Mapstead’s shop is Desert Mission Food Bank. It’s part of HonorHealth, formerly known as the John C. Lincoln Health Network. It’s housed in a 10,000-square-foot warehouse that includes a market where customers can choose their groceries.

Sue Sadecki, executive director of the Desert Mission and Community Service Programs, said it serves up to 350 people every day. But she said it’s not the only service that’s in demand.

"I think our issues with food insecurity at this point are really an under-told story," she said. "I really think that also the children’s clinics with the dental clinic is really probably something, and the medical clinic. Right now, we’re seeing an increased need in behavioral health services across the board."

Sadecki expects more community and economic development in Sunnyslope going forward. Desert Mission is actually hosting a business summit this summer to help move that along.

"It’s not so much we need to bring new businesses in, and we’re always open for new businesses, but it’s also supporting the businesses that are already here," said Jo Ellen McNamara, director of Desert Mission Neighborhood Renewal. "Helping them grow, helping them stabilize."

McNamara said the area has lots of micro-businesses, meaning the owner is pretty much the whole company. She said it’s important to help them grow and find customers and that it’s helpful to have businesses that are keeping tabs on the neighborhood.

Another thing some residents say will impact Sunnyslope is getting out and meeting their neighbors. Paul Sapp has lived in the area for almost 20 years and volunteers at Desert Mission Food Bank. He said the people living near him are friendly, even if they don’t stay for long.

"Most of the properties right around me are all rental houses," he said. "I’ve got a few neighbors that’ve been there as long as I have, but most of them come and go."

Sunnyslope Village Alliance President Caroline Lobo said another challenge standing in the way of getting to know neighbors are gates and the homes behind them. But she said the neighborhood’s amenities can help counteract that.

"The physical barrier’s still there," she said. "But the barrier between people gets broken down. And that’s why amenities such as North Mountain or the Bridle Path or events organized by community organizations have a crucial role to play just to break down these physical barriers and create a sense of community."

Another way for residents to get to know each other is at Mountain View Park. That’s where Jeremy Vasquez has started a community garden. He owns a gardening company in Sunnyslope and is on the board of the Sunnyslope Village Alliance.

"Living here for a long time, I’ve seen this park get a really bad name for itself," he said. "So, we’re trying to bring the community back in, get them to know their neighbors and work together to make it a good park and safe for kids to play in."

Vasquez has lived in the neighborhood for more than 20 years. He said when he was growing up, the park was known more for gangs and drugs than flowers. But not now.

"That’s where that pride comes from," he said. "I mean, you live there, you work there — what can be better than that?"

Vasquez started the garden with a city grant, but ran out of money before the project was finished. He estimates it needs about $3-4,000 more. Still, he predicts big things for the garden and his community.

"Well, I see it being an area where people want to live," he said. "And the property values raising. And just more pride. My friends have kids. I have a daughter that’s seven years old that’s growing up in Sunnyslope and I want her to go to Sunnyslope High School and to have that pride as well."

After five neighborhoods spread out over about 16 miles, we have reached the end of Central Avenue in front of a gated community at the foothills of North Mountain. Central continues on the other side of the mountain, but it stops and starts a few times north of here.

If you stand with your back to the mountain, you can see the trip we’ve taken over the past few weeks. There's Sunnyslope, then the road moves down to the trees of North Central, the high rises of Midtown and Downtown and finally the red blinking radio towers on top of South Mountain. It’s quite a sight — parts of Phoenix’s past, present and future all along one stretch of road.

You can hear all five parts of our series “Central, PHX” as well as photos from our road trip, interactive maps and more from some of the people we met along the way at kjzzcentral.tumblr.com.