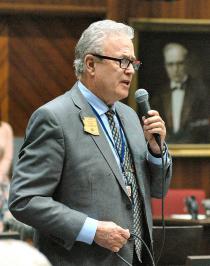 The Pinal County region faces a water crisis and a disagreement among some lawmakers and state officials over the best way to solve it.

The Arizona Department of Water Resources announced on Oct. 11 that the Pinal Active Management Area, one of five regions in the state where groundwater health is monitored, will experience a shortfall of 8.1 million acre feet of water.

That’s the difference between the projected need for water in the region compared to the available groundwater under Pinal County.

Tom Buschatzke, director of the Arizona Department of Water Resources, has repeatedly said it’ll take local leadership to find a solution to resolve the shortfall. He drove that point home at a recent legislative hearing.

“I think the proper place to start is here with all of you that live and breath in Pinal County,” Buschatzke said on Oct. 11.

That isn’t sitting well with Rep. Noel Campbell (R-Prescott) who ended that same hearing by scolding lawmakers for not getting enough done and ensuring a water supply for the Pinal County region.

“It's gotta come from him. He's got to show us the ability to pull us together and make us do something. And if we don't have that, we get nothing done,” Campbell said.

Ducey doesn’t sound interested in doing that. Patrick Ptak, a spokesman for the governor, said the executive branch, Buschatzke included, will be there to assist Pinal County.

But like Buschatzke, Ptak deferred to local officials to take the lead.

“It's critical that decisions about Pinal County's future are driven by Pinal County stakeholders,” Ptak said. “Our history tells us that real action on water policy needs buy-in from stakeholders, the Legislature, and the executive. That same collaborative mindset is needed again, and this administration stands ready to support and assist what needs to be a locally-driven process.

“The solution to the problem we are facing needs to come from the local stakeholders and leaders on the ground level, not a top-down approach,” the Globe Republican said.