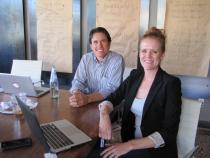 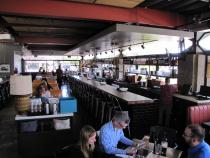 It’s only 16 miles, but in some ways this one road encompasses a little bit of everything Phoenix has to offer. We’ve been driving up Central Avenue from South Mountain to North Mountain talking to people about their neighborhoods along the way.

Today, we can actually ditch the car as we stand on the platform at the light rail station at Encanto. We’ve reached the section of Central between McDowell and Bethany Home. Back in the day, this area was known for cruising, but today — it’s more about the train.

"The idea is that we are a melting pot of people who want urban living," said Susan Thompson.

Thompson is president of the Midtown Museum Neighborhood District Association, which describes itself as committed to building community for those who work, live and play in Midtown Phoenix.

"I love sitting in my backyard and looking at the high rises, but I like having a yard," she said. "But, I love being in the high rises to see the expanse of this beautiful Valley and that’s also what’s exciting, is that when you’re in these buildings, you don’t have other buildings butted up against you. You can’t get that anywhere else."

If you drive (or ride the light rail) up Central, you can really see an era of Phoenix’s history passing by, specifically, the middle of the last century. In fact, Thompson and I joked that her neighborhood seems like the part of town in which Don Draper from the TV show “Mad Men” would be most likely to live.

"I think we take a lot of pride in our mid-century modern buildings," Thompson said. "We want to protect them and preserve them. Certainly, things like “Mad Men” have brought mid-century back to be a very hip sort of perspective, but I think what we like about mid-century modern — it was a period of possibility."

Thompson uses that word, "possibility," a lot to describe Midtown. She sees it in older apartments and nearby high rises.

The kitchen at Federal Pizza is humming at lunchtime. It’s one of four restaurants, plus an ice cream shop, within about a block of each other on Central just north of Camelback, from the company Upward Projects.

Its founding partners Craig DeMarco and Lauren Bailey have their offices in the same building as Federal Pizza. It was designed by Al Beadle, a well-known mid-century architect. Bailey said having four historic neighborhoods around Central and Camelback made the area a very appealing place to open their restaurants. But, she said, it didn’t always feel that way.

"It was definitely a big risk," she said. "Craig and I sat in the front of Postino’s parking lot and watched Circle K get robbed a couple times and we were like, ‘We’re either really, really crazy and dumb, or this is gonna be a great idea — one or the other.’ And luckily, it was the latter."

Bailey and DeMarco’s restaurants are housed in buildings that used to serve very different purposes. Federal Pizza, for example, is in the former First Federal Bank building. This concept of adaptive reuse is important to DeMarco and Bailey. They say reusing existing buildings helps connect with the community.

One of those throwback factors is the close proximity of homes to offices. There are high rises of each along this stretch of Central. But, just as residents left Phoenix’s urban core in the past, employers did the same.

Phoenix’s Community and Economic Development Director Chris Mackay said some of the reasons were similar. The suburban areas were newer, closer to freeways, it felt more "now." But that was then.

While people are moving back into the heart of the city, businesses have been a little slower. Mackay hopes to change that.

"These are grand, beautiful buildings and people are taking another look at them," she said. "I think what’s happening is the workforce wants to be in an urban environment. Where my generation wanted to be suburban, this generation wants to be urban and that’s causing these buildings to get a whole new look."

Mackay met me at the Century Link Building on Thomas, about a block east of Central, with Jerry Roberts, an executive VP with the real estate brokerage firm CBRE.

Roberts said Midtown’s office vacancy rate is 27 percent, compared with 21percent for the market overall. But they’re trying to bring that down by showing potential tenants what could be.

Roberts and Mackay took me to a floor in the building that’s been pretty much gutted. Just some columns with a concrete floor and windows lining the entire perimeter, which provided particularly spectacular 360 degree views of Phoenix.

Roberts said when companies look at existing office space, they see the past. But when he can show them what basically amounts to an empty canvas?

"We’ve actually done it three times," he said. "Every time we’ve done this to the floor, we’ve leased it."

Roberts said workspaces have evolved over time. Chris Mackay said getting more companies and jobs into these Midtown office buildings is one of her top priorities.

"That urban heart of any city is what any city should pay the most attention to," she said. "And outside of downtown, Midtown is that area. And you get this area repopulated and people living and that vibrant economy down here and it begins to spread out."

Mackay predicts in the next year to year and a half, the conversation about Midtown’s office vacancy rates will be a very different one. She expects to get that number below 20 percent. And part of the reason is right outside.

"I think light rail has really opened that up for companies and for site selectors and brokers to take a new look at what the Midtown market looks like," she said.

Mackay said a couple of these buildings could ultimately be converted into housing, but most should stay as offices.

But not everyone agrees with that plan. Louise Roman has lived at One Lexington on the corner of Central for about five years. It was converted from office space into condos. Roman is also head of the HOA’s architecture committee and said she’d like to see all high rise office buildings turned into places to live.

"We really kind of think of it as a model for what could happen with a lot of the underutilized high rises, especially in the Midtown area, that maybe even some combination of living and working would be desirable," Roman said.

While many people in the area generally agree that the light rail is significant, many developers and even residents like Roman say there’s more to do, especially with one particular spot in the neighborhood — Park Central. It was Phoenix’s first shopping mall and now houses a few restaurants, but it’s never bounced back to the level of patronage it once had. It’s just a little south of where Roman lives and she calls it a missed opportunity.

"It’s the closest to kind of the downtown core that is without really enough going on on it," she said.

Roman said Park Central is a huge missing piece for the area, especially since it’s between two light rail stops. But Park Central isn’t the only part of Midtown that could use some TLC. There are some empty lots along Central in the neighborhood.

Susan Thompson said they need to be filled in, but with the right kind of project.

"If you’re a developer and if you’re out there, please hear me: we want you here, but know your market," she said. "Why come here and build something that people are not interested in living in? It’s going to fail."

Thompson said that means not trying to recreate the suburbs in one of Phoenix’s central cores, but instead building off the neighborhood’s urban feel.

Check out more of our Central Ave. project online, such as photos from along Central, interactive maps and a whole lot more. You can find it at kjzzcentral.tumblr.com.