(Mark Brodie/ KJZZ News)
David Foster is a professor at the school’s Tempe campus, but has lived in Phoenix for almost 50 years and wrote a book called “Glimpses of Phoenix.” 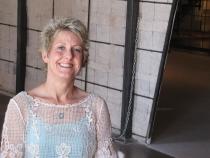 (Mark Brodie/ KJZZ News)
Shannon Scutari said Roosevelt Row’s growth comes from lots of people who have made a commitment to the area.

(Mark Brodie/ KJZZ News)
The Duce is a mixed-use space in the warehouse district of downtown Phoenix.

It's an iconic road that splits the city between streets and avenues. When you travel its length, you can see Phoenix’s past and future and you can see distinct neighborhoods that have grown along with the city. This is why we're driving along Central Avenue from South Mountain to North Mountain in a new series called “Central, PHX” exploring the people and places that define the avenue.

Last week, we went from South Mountain to the Salt River. Today, we continue north from the River to McDowell.

First we go downtown on the corner of Central and Washington. In a sense, this is where it all starts in Phoenix — at least address-wise.

"For years, we used to tell all these people from out of town, ‘Just go to Google Earth and type Phoenix, Arizona in there and nothing else and see where the pin drops,'" said Jeff Moloznik, vice president of development for RED Development. "And the pin would dead end right into Central and Washington and there was nothing there."

RED Development is the company behind CityScape, a mixed-use development which takes up a couple of city blocks between First Avenue and First Street and Washington and Jefferson.

The first phase of CityScape opened in 2010, around the same time the light rail started running. ASU began offering classes at its downtown campus and the Phoenix Convention Center was undergoing expansion. Moloznik calls the changes to downtown over that time almost revolutionary.

"This neighborhood literally was born, probably I’d say, in a period of five years and now it’s all figuring out how to coexist," Moloznik said.

Less than a mile north of Moloznik’s office, just a few light rail stops away, is another Phoenix neighborhood that has enjoyed a revival.

"The great thing about Roosevelt is it’s truly built from within," said consultant and entrepreneur Shannon Scutari. "And then that energy then ripples in a really unique way throughout the rest of the city."

Scutari specializes in transit-oriented community development. She said Roosevelt Row’s growth comes from lots of people who have made a commitment to the area in order to create what they couldn’t find in other parts of Phoenix.

The neighborhood’s popularity, though, has caused some tension. Earlier this year, protesters held a mock funeral for Roosevelt Row. They were concerned that plans to tear down a few buildings in the neighborhood would cause it to lose some of its character. Scutari said it’s important to think of investments and developments as more than just financial arrangements.

"If the only metric is financial gain, then we will lose the commitment to the authenticity of the area," she said. "So the money has to really come with the strings that say it’s really a long-term commitment for the investor."

Scutari and I spoke upstairs from Songbird Coffee and Tea House on Roosevelt, which is also connected to a gallery and office space. Just nearby is another notable tenant of this neighborhood: ASU's downtown campus.

David Foster is a professor at the school’s Tempe campus, but has lived in Phoenix for almost 50 years and wrote a book called “Glimpses of Phoenix.” He said while some cities and universities have trouble relating to each other, that hasn’t been the case here.

"The incursion of the university here has meant that the existing residential installations, some of which are very old, have had new tenants," Foster said. "It’s meant the building of new residential areas. It’s meant an enormous development of commercial establishments. And so there are people who are making a lot of money off of providing services to the university."

Foster said downtown’s revival can be attributed, at least in part, to people deciding they wanted to live closer to where they work and hang out. And that coming back to downtown is a way for Phoenicians to enrich their depth of experience of the city.

"This area now is a city again," he said. "And I wish I had done then-and-now photography to show how much this area has changed."

Another long-time resident agrees the neighborhood is different than it used to be. G.G. George is president of the Encanto Citizens Association.

"Neighborhoods really are the core of our city," George said. "So, people have come together to basically rescue these older neighborhoods and make them very desirable once again."

George said that really picked up during the Great Recession, when some people living in the ‘burbs decided to move back into the city. She describes downtown as an interactive portion of Phoenix.

On the southern end of this section of Central, people are still working on developing that interactivity.

One of them is Steve Rosenstein. Along with his wife, he owns and operates The Duce.

"Most of the people that I knew up in Scottsdale said, ‘You’re out of your mind for going down there and trying to do something like this,’" Rosenstein said.

The Duce is another multi-use space: part bar, part game room and parts of a few other things. It’s been open for five years. Rosenstein said when he and his wife bought the building, it needed a lot of love. He said downtown was already in the midst of its revitalization, but south of downtown in the less dense warehouse district where The Duce is, it was still quiet. Rosenstein, though, predicts that’ll change.

"It’s really gonna be the right developers coming down here and doing the right kind of residential," he said. "The companies are gonna find it, because vintage warehouses are really what people want right now and there’s not a lot of them left and whatever’s left is right here in the warehouse district."

To Rosenstein, the right kind of residential is a combination of lofts in old warehouses like his, but also new mid- and high-rise buildings, as well as townhouses.

Jeff Moloznik said having a bunch of different types of places to live will only help Phoenix. He and Shannon Scutari both understand why this area may occasionally experience some growing pains. Scutari points out Phoenicians have had to discover what an urban experience really is, even though the city may have been somewhat urban years ago.

"But we’ve gotten so far away from all of that over the last 50, 60 years, that the generation of people working on these things right now have to really create what urban communities, or not even necessarily urban, but what more connected communities look like," Scutari said.

And even though the neighborhoods in this section of Central have become more connected in recent years, there are still some connections to Phoenix’s past here — including the Westward Ho, Shackelford House and Irish Cultural Center.

You can hear more from some of the people who live and work along Central, see photos from the entire stretch of the road, check out maps of the neighborhoods and much more at kjzzcentral.tumblr.com.