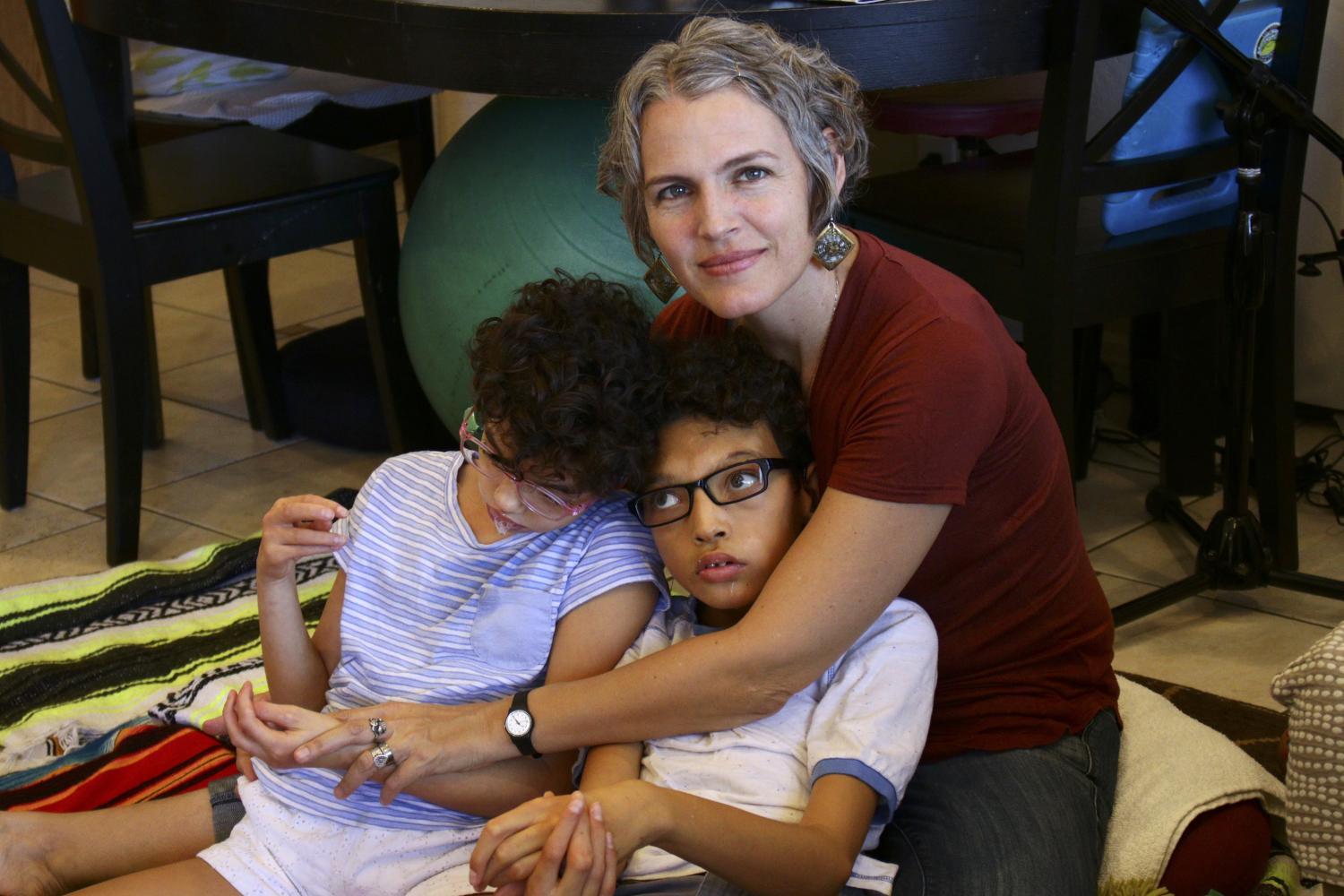 Mariana Dale/KZZ
Heather Joy Magdelano and her children Camila and Soliz on Oct. 7, 2019.

Soliz, 12, and his sister Camila, 10, lay next to each other colorful sarapes on the floor of their Phoenix home.

“My son is very much [an] extrovert, totally center of attention,” Magdelano said. “My daughter is a little more introverted.”

But both children love horseback riding and swimming, and they both share the same rare genetic condition.

“It would take us a long time to face what that would really mean,” Magdelano said. “It's not all terrible, but it is different. It's like we're fitting into a world that's not created for our kids.” 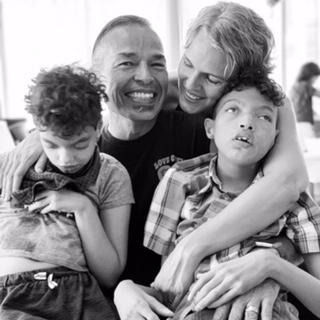 This journey would lead Magdelano to create a place in the world for moms of children with disabilities.

After eight days in the neonatal intensive care unit, the family of three finally drove home to their Phoenix home.

Madgelano’s cellphone rang and, when she answered it, an unfamiliar doctor told her Soliz had Wolf-Hirschhorn syndrome.

Soliz is missing a small part of his DNA, specifically the fourth chromosome. Among the symptoms, he’s considered deaf-blind, has cognitive delays and epilepsy with life-threatening seizures.

“We were bombarded by the worst-case scenarios of what could potentially happen and go wrong,” Magdelano said. “If someone could have just told me everything was going to be OK and just focus on bonding with your baby ... that would have been the best thing anyone could have ever told me.” 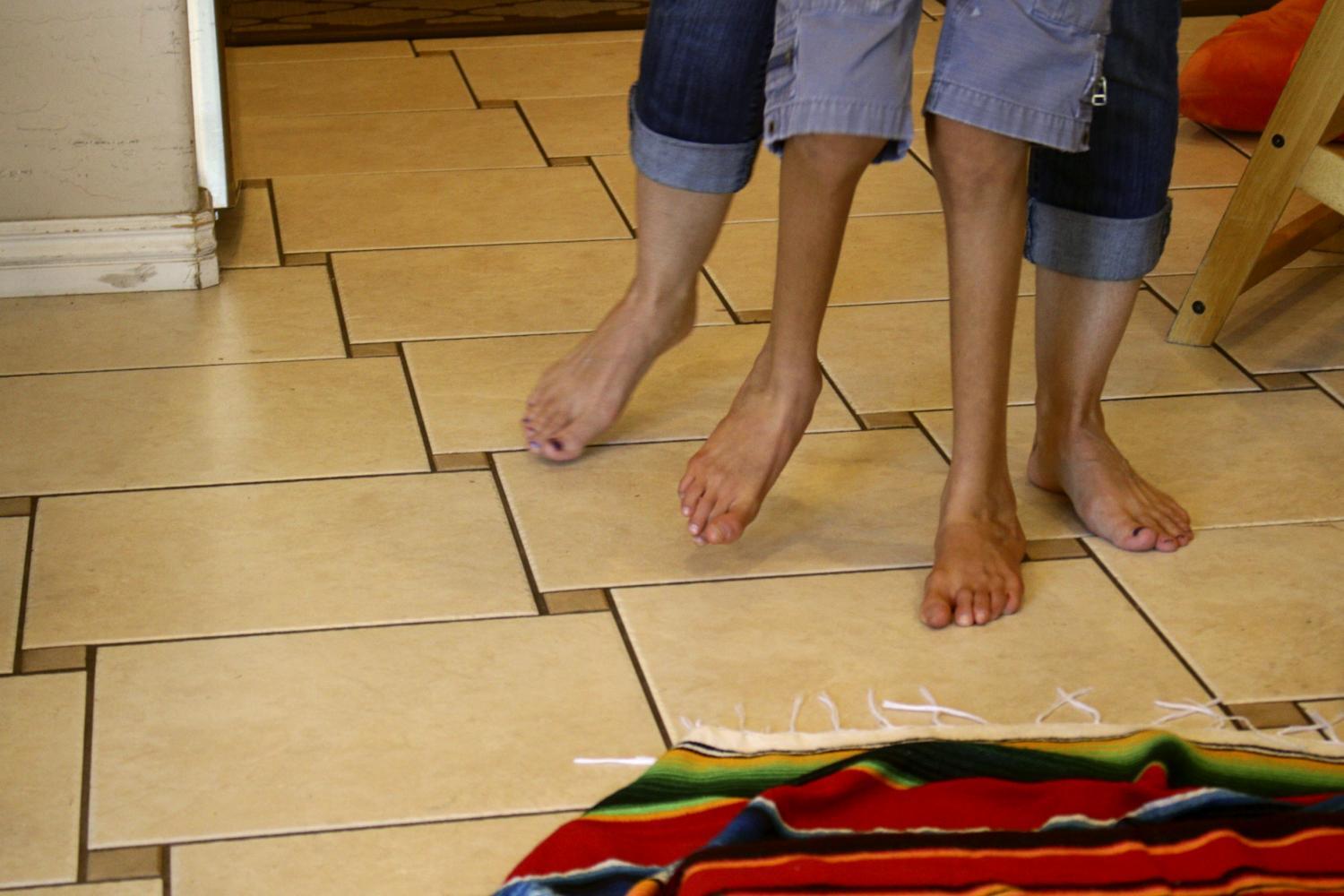 Less than two years later, the Magdelanos welcomed their daughter.

Heather Joy brought Camila into the world with four pushes and her husband, Andre, caught the baby with the help of the midwife.

“I knew right away that she had the same syndrome as my son,” Magdelano said. The family later found out her husband is a carrier for the condition and so is her stepson, Roman, who has a child with Wolf-Hirschhorn syndrome, too. 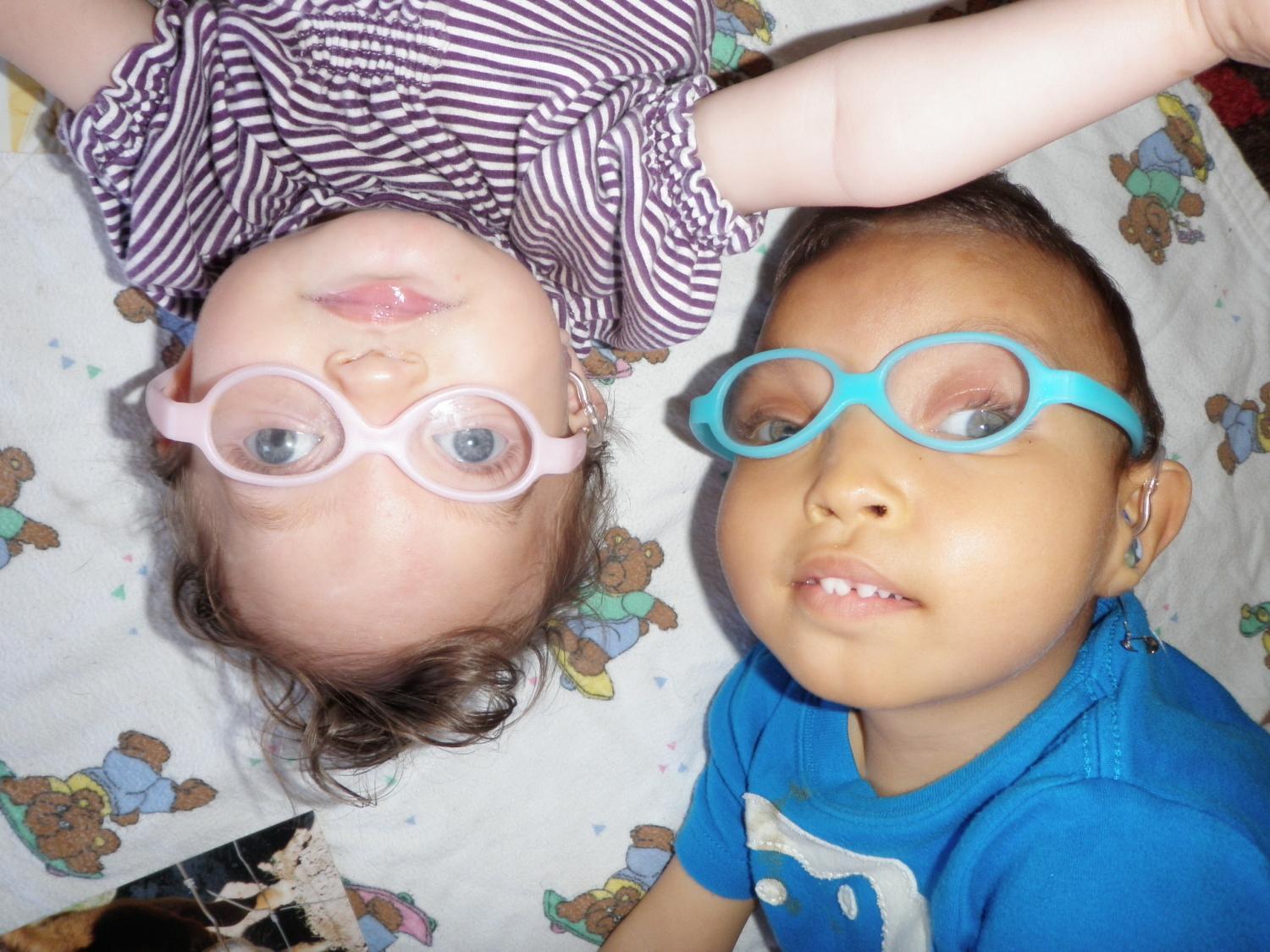 Heather Joy Magdelano
"Personality wise they're like yin yang. My son is very much extrovert totally center of attention," Magdelano said. "My daughter is a little more introverted."

Magdelano describes this time as “total survival mode.” There were near-daily doctors and therapy appointments. Magdelano pumped breast milk. Both children are nourished through a tube in their stomach so Magdelano homemade baby food from scratch for a decade because she didn’t want to feed them processed formula.

There was joy in those early days, but there was also terror. At one point, Camila mysteriously started hitting and scratching herself for more than a year.

“When you're a parent, you want to take care of your child,” Magdelano said. “You want to see what you're doing is helping, and when it's not helping it's so devastating.”

“I was depressed, anxious, my life felt completely overwhelming,” Magdelano. “My marriage was completely falling apart. And I was suicidal.”

She shared these thoughts and feelings during a moms support group at a family retreat in Tucson.

The life coach scheduled regular phone calls with Magdelano. She suggested Magdelano take five minutes to do nothing.

“That was a pivotal moment in understanding that I could make that choice,” Magdelano said. “I could just lay there on the floor or lay there on my bed and do nothing.”

In the moments of nothing, she grieved for the life she had once imagined and started to heal. 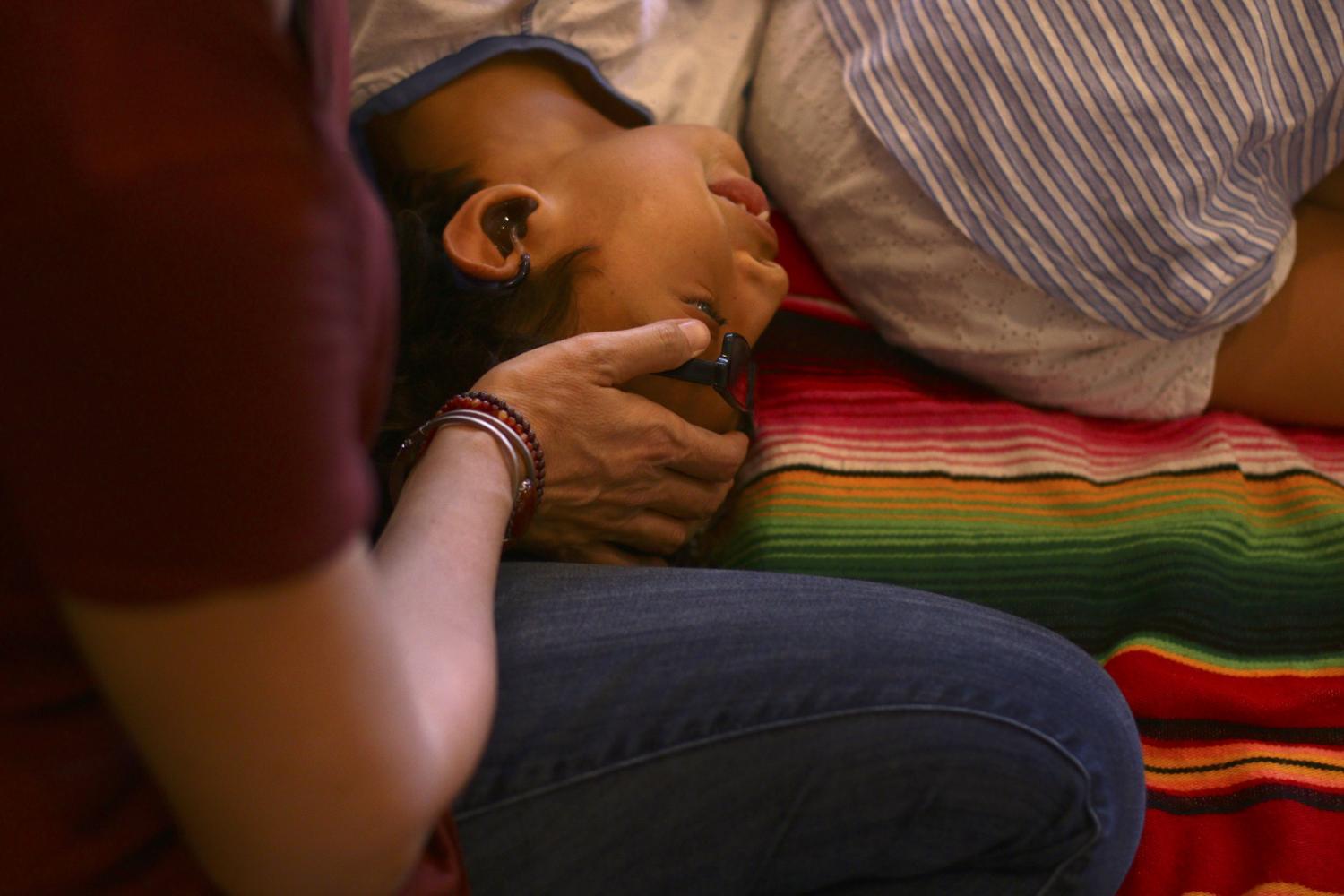 One day while her children were at Ryan House, a respite center, she attended a Yoga Nidra class.

“You literally lie down on the floor, and you receive words that help you relax and go into this deep healing state,” Magdelano said. “So literally, you are doing nothing.”

Magdelano realized she wanted to bring this experience of “doing nothing” to other moms of children with disabilities.

The owner of Metta Yoga in Phoenix offered to donate studio space for a monthly class, and Magdelano organized the first class in October 2016.

Magdelano's certified in the Integrative Amrit method of Yoga Nidra, but often other teachers donate their time to the class.

One Saturday this year, about a dozen moms filed into the dim, wood-floored space.

They assembled nests of blankets, pillows and blankets, and lay down on the floor. 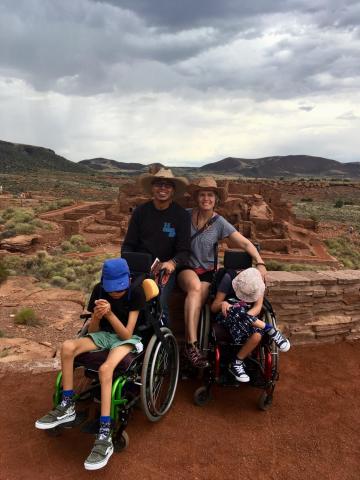 Each woman introduced herself, said the name of their children and their disability and talked about what they’ve gained from the class, or if it was their first time, why they came. Some people’s voices were thick with emotion when they shared what brought them into the room.

Magdelano invited them to take a deep breath in through the nose and exhale through their mouths.

“We didn't have one trauma and then we chose to rise up,” Magdelano said. “We have them day after day sometimes. To choose to be here is a choice to make better of our lives.”

Magdelano’s Yoga Nidra is an example of how someone practice mindfulness, an awareness of your thoughts, feelings and body.

There’s a growing body of research that shows mindfulness has positive benefits for parents of children with disabilities.

University of Michigan adjunct Rita Benn co-authored a paper published in the journal Developmental Psychology in 2012 that found mindfulness training reduced stress, anxiety and feelings of depression in these parents when compared to a control group.

“When they’re confronted with something that’s challenging for them they can pause and they can stop for a moment,” Benn said. “Not everything needs to be solved instantaneously and they can be less reactive.”

One way to pause is by breathing deeply, filling your lungs with air and expanding your belly while keeping your chest relatively still. This is called diaphragmatic breathing.

Benn said while there are books and apps that can help a person develop a mindfulness practice, she suggests people find a class or group.

“I think one of the unintended consequences of any of any of these group based interventions is feeling a sense of community,” Benn said.

Psychologist Tara Cousineau has also studied how mindfulness and self-compassion might help parents.

“It's not the right answer to everything,” Cousineau said. “But it is a really valuable component in managing one's own distress.”

She described self-compassion as the ability to view your own suffering with compassion and tenderness.

“It's much easier to be empathetic and kind towards other people,” Cousineau said. “We're not necessarily conditioned to turn that same kind of care towards ourselves, because then that might be interpreted as being indulgent or selfish.” 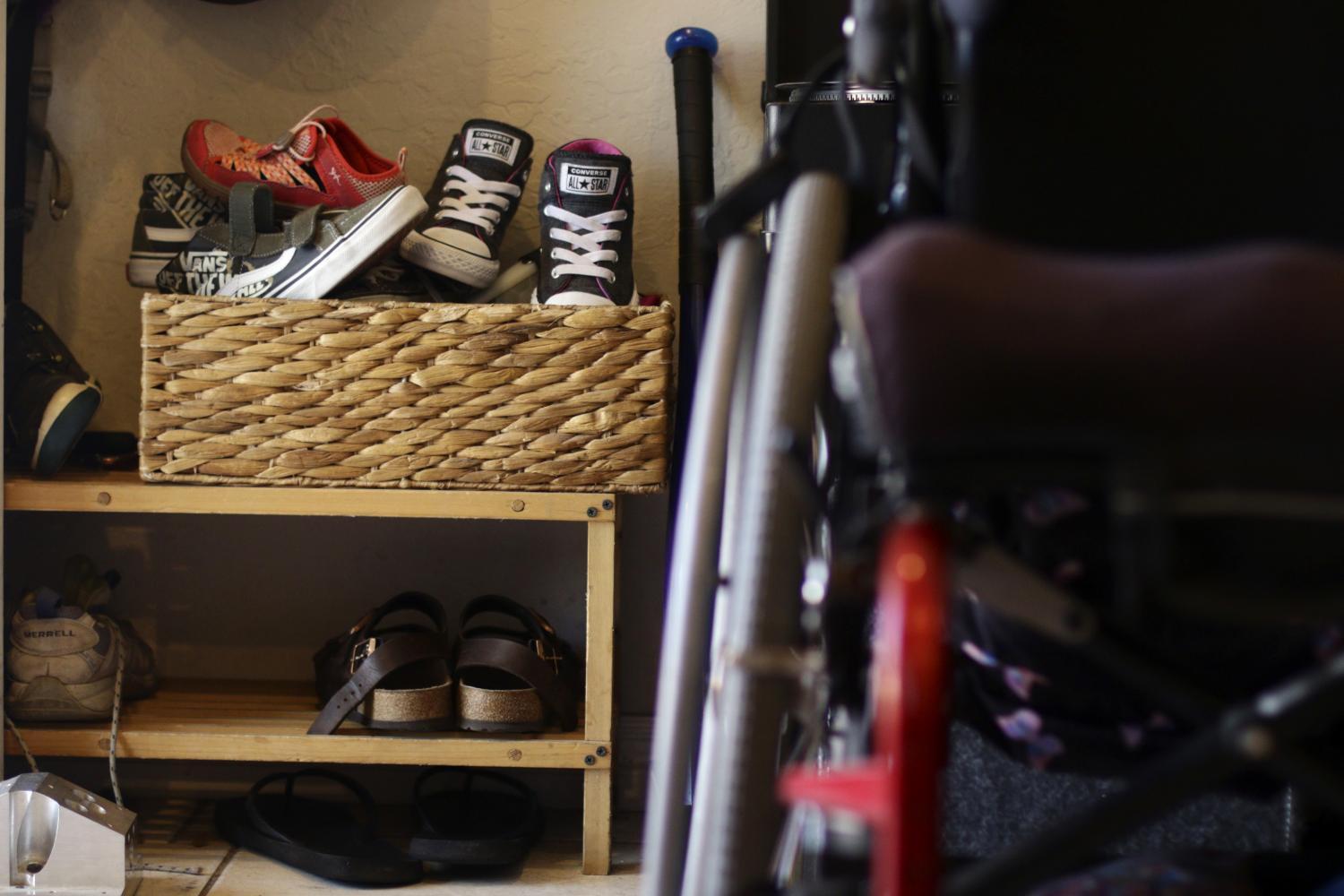 Mariana Dale/KJZZ
The Magdelano family's shoes and the children's wheelchairs wait near the door in their home.

'I'm Very Resilient, It's A Choice'

Magdelano doesn’t make all of her children’s food from scratch anymore. It’s one way she has added a little more time back into her life.

She still blends smoothies for them. The day we talk it’s dates, kiwis, grapefruit from a tree in the yard, tangelos from the neighbor’s tree, a handful of hemp seeds and a little bit of water.

She sucks the pink liquid into a syringe and pushes it into Camila’s stomach tube.

Magdelano hasn’t worked full time since her son was born. Previously she was an assistant midwife and postpartum doula.

Now she organizes Journey Into Joy, is the family engagement coordinator for the Arizona Deafblind Project and teaches yoga. She writes about her family in a blog. Her husband, Andre, works in ASU’s School for Engineering of Matter, Transport and Energy.

The family relishes any time they can spend outside together. This summer visited Wupatki National Monument near Flagstaff.

In a photo, Heather and Andre stand and Camila and Soliz sit in their wheelchairs in front of the red stone remnants of the pueblos. Everyone has a hat on.

“I'm very resilient. It's a choice,” Magdelano said. “Even if I had a vision for what my life would be and it ended up not being that ... it's still possible for it to be a life that is good.”

“Often people might say you're like this special person and therefore you have special kids, and I totally don't necessarily agree with that,” Magdelano said. “I believe that my kids have given me the opportunity to go deeper.”