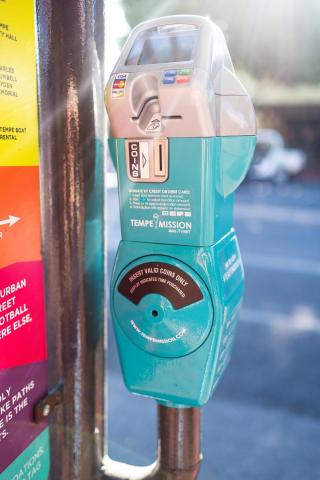 Downtown Tempe Authority
These parking meters in Tempe collect money for the homeless.

Phoenix unveiled its “giving meters” program earlier this year, where people can donate to help residents experiencing homelessness by putting change or a credit card into a special parking meter. Local artists hand-painted the meters, and money given through the meters in downtown Phoenix will be collected by an outreach team that helps connect services to homeless residents that need them.

Phoenix isn’t the first city to try this approach. Tucson rolled out its “change meters” program about two years ago. The city has around 20 meters collecting money.

John Jacobs is Founder of the Tucson Change Movement and one of the prior Chairs of the Downtown Merchants in Tucson. He mentioned the idea of donors needing and wanting to know where their money goes, and experts in the field of philanthropy said that’s a really important consideration before making a gift.

Suzanne Coffman, editorial director for Candid, which is a non-profit that connects potential donors with the resources and information they need to donate, doesn’t think there’s a wrong way to contribute, but she said even if it’s some information on a giving meter, donors should have a sense of where their money’s going.

"I don’t believe that these loose change donations discourage people from giving more formally and doing their research," she said. "I think it’s more of an opportunity thing — there’s an opportunity to grab people where they are and say, ‘Hey, would you like to support this cause?"

Coffman said she does things like rounding up to the nearest dollar at the grocery store to give to food banks, but said even in that case, accountability is key. Eileen Heisman, president and CEO of the National Philanthropic Trust, agrees that transparency is important, and she said whatever gets a donor to the philanthropic table is a good thing.

"I think the real question is, is it gonna raise enough money to make a significant difference?" She said. "Or, is it just gonna be this nice thing that you have that’s not really gonna be material to what it means to help the homeless? But I think you will get participation, it’s just a matter of how much."

Heisman said the philanthropic community tends to think it's better to give to an organization that helps people experiencing homelessness, than giving to an individual. She said that while that’s what she tends to do, she also has friends who’ll buy food, and deliver it to people who need it.

"You know, if somebody’s right in front of you and you’re walking at a quick pace and you’re about to go to the movies or go to a store or do an errand, and you have somebody in need right in front of you, you don’t really have the time to do that kind of vetting," she said. "So it tends to be a more impulsive give. It probably is for a smaller amount of money. And, you don’t need or want accountability necessarily – you’re just alleviating what you’re perceiving as human suffering at that moment."

Heisman said the homeless can be a difficult population to help, and Suzanne Coffman said when a donor gives directly to another person, they’re acknowledging their humanity, but she said that’s not always the best way to make a dent in a community’s homelessness problem.

"Quite often, the organizations are working at scale, and so they’re trying to, rather than just helping one person, they’re trying to help many people," she said. "Many of them are trying to work to solve the underlying problem, and it also can help the donor, because it’s so easy as a donor to be overwhelmed by the amount of need around you."

Neither Coffman nor Heisman were aware of any research done to determine whether donors are likely to give more money to an organization or an individual. But both say one way or another, it’s good to get potential donors to give to causes in which they believe.