Study: Why ‘Metal World’ Psyche Is Only Half As Dense As Expected 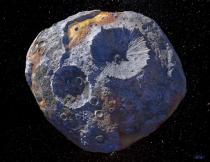 In 2022, NASA will send its first mission to the asteroid Psyche, a metal world that some believe to be the core of a failed planet. But Psyche is only about half as dense as it should be. New research offers one possible explanation.

The findings appear in the journal Nature Astronomy.

Based on its density and how well it reflects radar, Psyche should consist mainly of iron and nickel, as opposed to the rocks that make up most asteroids.

But with recent measurements revealing a much lower density, scientists needed a new hypothesis — one that could still explain the high radar reflectance.

The authors suggest Psyche's core is wrapped in a less-dense, rocky mantle a few tens of kilometers thick. That relatively small portion of the asteroid's 226-kilometer (140-mile) diameter is enough to bring Psyche's density in line with new estimates.

For the other part of their explanation, they rely on a new concept called ferrovolcanism: geological processes involving molten metal instead of melted rock. Long ago, pressure within the cooling asteroid might have forced veins of nickel and iron outward from its core to the surface, where its metallic glint could have misled radar scans.

Co-author Michael Sori of the University of Arizona said the process only would work under very limited conditions.

"The exciting part about Psyche is that it is one of the few bodies, and maybe the only body in the solar system that we know that — as best we can tell from remote sensing observations from Earth — might fit these conditions," he said.

Gravity and composition measurements by the Psyche mission should help settle whether the two-layer hypothesis is correct.