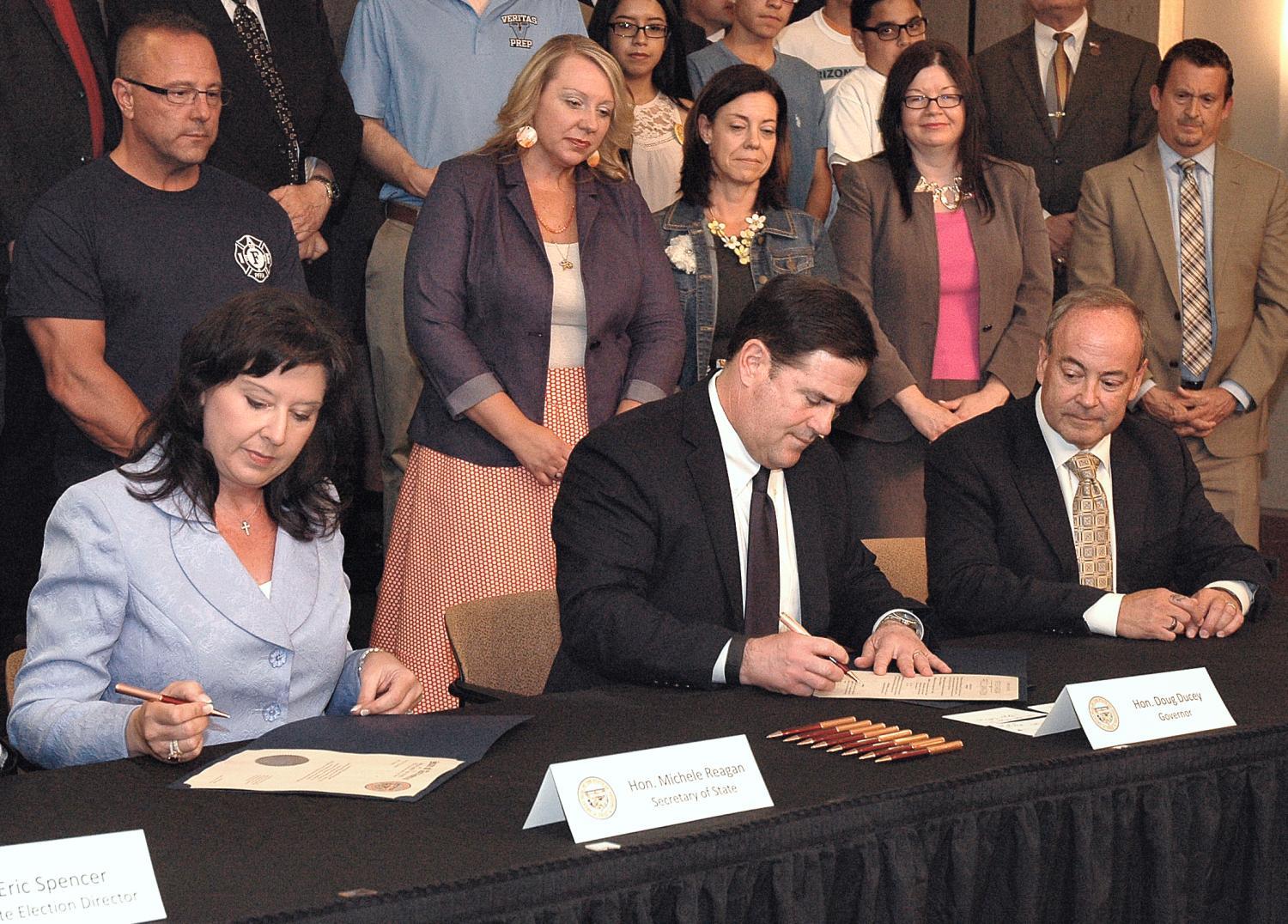 Howard Fischer/Capitol Media Services
Gov. Doug Ducey, center, certifies the results of the 2016 special election that approved Proposition 123 to add education funds. With him are Michele Reagan who was secretary of state and Supreme Court Justice Clint Bolick.

Arizona Gov. Doug Ducey acted illegally in pushing his 2016 plan to take $2.2 billion over a decade for K-12 education out of a trust account without first getting congressional approval, a federal judge has ruled.

But Neil Wake won't order the funding halted, at least not now.

In a sharply worded decision unveiled Tuesday, Wake said Ducey crafted the plan to make up for the fact that the state had ignored voter-mandated requirements to properly fund schools. That solution became Proposition 123, which voters approved in 2016.

But Wake said that the state did not first obtain congressional approval for the shift. He said that is necessary because the federal Enabling Act that made Arizona (and New Mexico) into a state in 1912 gave it lands to hold in trust for schools.

"The state and its officers took those monies illegally and spent them,'' the judge wrote.

Listen To The Arguments For And Against Arizona's Proposition 123

Ducey responded to the ruling with sharp criticism.

“Judge Wake puts on a robe in the morning and thinks he's God. But he's not. I want to tell you what everyone down at the courthouse needs to know. It's time for Judge Wake to retire.”

Ducey says he believes the ruling will be overturned on appeal.

More to the point, that federal law that Wake said Ducey and lawmakers ignored allows the state to use only the interest off the money earned. The idea was to preserve the body of the trust — and the interest that would earn — for future generations.

By contrast, Proposition 123 actually withdraws more than the earned interest, meaning the size of the trust, designed by Congress to be a permanent, reliable source of education dollars, actually is worth less now than it would have been without the ballot measure.

Current figures obtained by Capitol Media Services from the Treasurer's Office show the current value of the trust at nearly $6.1 billion; without the extra withdrawals it would be worth about $1 billion more. That, in turn, will mean less in interest earnings for K-12 education once the extra distribution ends as scheduled in 2025.

The ruling has no immediate effect on school funding. It allows the state to continue to draw more than $200 million a year out of the trust to fund education through 2025.

But Wake barred the state from making additional diversions after that. And he said such a maneuver likely will be necessary given what he said has been the failure of lawmakers for years to properly fund education.

The ruling should come as no real surprise.

Wake had issued a similar ruling last year. But attorneys for Ducey effectively sought to have it set aside because, while the lawsuit was pending, the governor got a provision inserted into a 2,400-page federal appropriations bill giving the required congressional approval.

But the judge said that didn't retroactively legalize what was an illegal act in the first place, especially as Ducey was still arguing that congressional approval wasn't necessary in the first place and that Congress was acting on its own.

"Congress did not act in a vacuum,'' Wake said, saying Ducey stepped in when the case was not going his way.

"The governor's assertion that he somehow was not involved is disingenuous,'' the judge wrote. "The court is not fooled.''

The ruling drew derision from gubernatorial press aide Patrick Ptak who called it "incoherent," "poorly reasoned" and "an example of massive judicial overreach and activism."

"Rarely before have we seen such a blatant disregard of facts, precedent and common sense to push forward an agenda of one biased, activist judge,'' he wrote, vowing an appeal.

The record, however, shows that Ducey was on notice of legal problems even before he had Proposition 123 put to voters in 2016: Jeff DeWit, who at the time was state treasurer, told lawmakers they could not do what the governor was proposing.

At the root of the issue is a 2013 Arizona Supreme Court ruling that the state had ignored a 2000 voter-approved mandate to increase state aid to schools annually to keep pace with inflation.

Ducey, who took office in 2015, declined to increase taxes to comply with that ruling. Instead he and legislative leaders came up with a plan to tap into the special trust fund that consists of money the state earns from the sale and lease of about 10 million acres of land Arizona was given by the federal government when it became a state.

As originally enacted in 1912, schools were to get the interest earned, leaving the "corpus'' of the fund untouched.

Proposition 123, however, set the distribution at 6.9 percent, regardless of how much the fund actually was earning in interest, to generate $2.2 billion over a decade. That meant actually taking more out than interest earned, cutting into the trust fund itself.

The plan had broad support in the education community. But the judge said, no one bothered to first seek congressional OK.

That led to the lawsuit by Michael Pierce and Wake's first 2018 ruling.

Now, unless overturned, this new decision it precludes a similar change in trust distributions in the future without first going to Congress. And Wake, in his ruling, said that the history of education funding in Arizona strongly suggests that there will be a new effort to raid the trust in 2025 when Proposition 123 dollars run out.

"Arizona has followed a long-term policy of cutting funding for public education,'' the judge wrote, rather than raise taxes.

By 2025, Wake said, "the state will be habituated to the generous distributions from the School Land Trust to make up for decades of tax cuts and other refusal to fund current education from taxes.''

And Wake said a future bid to tap the trust is even more likely because of the difficulty in raising the revenues from taxes that state courts have said are necessary to properly fund K-12 education.

The judge suggested some of that is due to a provision in the Arizona Constitution.

He said lawmakers can — and have — cut taxes with a simple majority vote. Yet it takes a two-thirds vote to raise them. That, said Wake, means a minority of lawmakers can effectively block raising new revenues, forcing the full Legislature to look to alternatives like taking extra dollars out of the trust.

That question of what happens after 2025 was on the mind of state schools chief Kathy Hoffman.

"The next step our state must take is finding a sustainable revenue source that will fully restore education funding to pre-recession levels,'' she said in a statement.

"We do need a sustainable funding source,'' agreed Senate President Karen Fann. But the Prescott Republican said she supports an appeal of Wake's ruling, saying lawmakers need the flexibility to be able to use trust dollars as needed

Sen. Martin Quezada, D-Glendale, said the ruling is not really a surprise.

"This is what happens when politicians refuse to raise needed revenues and have to come up with legally questionable ways of funding Arizonans' needs and values,'' he wrote in a Twitter post. "We need leaders who will make tough decisions and do what is needed to fund our schools.''

Aside from arguing the judge's decision is legally flawed, Ptak also alleged some impropriety, saying Wake personally recruited an attorney to represent the plaintiff even after he failed to appear in court.

"The judge indicated a personal agenda against the will of the people.'' Ptak said.

Andrew Jacob acknowledged he took the case after going into partial retirement, having told Wake previously that he'd been willing to work for free on any case where a self-represented plaintiff needed help in a case of some significance.

This case, said Jacob, fit that description, with Pierce having no legal counsel. But Jacob said Wake never discussed the specifics of the case with him.