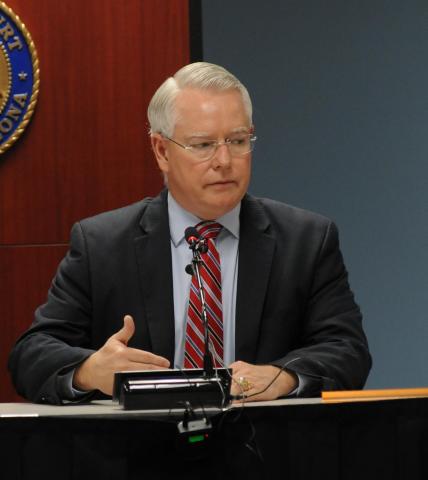 STEVE GOLDSTEIN: Gov. Doug Ducey has named Maricopa County Attorney Bill Montgomery to the state Supreme Court. The governor made the announcement yesterday via Twitter, framing Montgomery as a justice who will "interpret the law — not someone who wants to write the law." No one seemed especially surprised by the selection, with the rumors that came well ahead of the announcement alleging Montgomery's appointment was inevitable. And Montgomery's supporters and detractors alike have been quick to respond. Joining us now to talk about the governor's fifth appointment to the court is HighGround's Doug Cole and executive director of the ACLU of Arizona, Alessandra Soler. Welcome to you both. Thanks for being here.

ALESSANDRA SOLER: Well thanks for having us.

GOLDSTEIN: So Alessandra, let me just start with you.

GOLDSTEIN: Just a quick reaction to this because, in some sense, certainly Bill Montgomery's been controversial, but even in the sense that he has been an elected official, that is something we rarely see.

SOLER: Right, right. This is a politician. He's been a politician for nine years here, and I think we were, we think that the governor has selected the least qualified candidate. This is a politician who has shown, during his tenure, that he cannot disregard his own personal biases when making these decisions that impact the most important legal office, as Doug was saying, in the state. This is an individual who has marginalized communities, he has refused to process paperwork for gay couples, he's brought in anti-Muslim activists to train his his officials, he's got a long history of going after medical marijuana patients, and I think that we believe that he's got a destructive civil liberties record and doesn't belong on the court.

LAUREN GILGER: And Doug, let's go to you next with your reaction from sort of the other side of the aisle.

COLE: Well, as Steve said in his intro, this is an appointment that's been long expected. In fact, I think the bigger news this morning would be that he didn't get appointed to the Supreme Court. But this is a person that has a very long record as county attorney, and that's what's unusual. We know a lot about Bill Montgomery, unlike other previous appointees to the Supreme Court. And so his record's out there for all to see, and the governor's office is well aware, has vetted him. And this governor has been nothing but consistent on his judicial appointments, especially to the Supreme Court. This is number five. No other governor in Arizona history has appointed five Supreme Court justices. Most governors appoint two, maybe three. And the other interesting aspect of this is every one of his appointments, save Justice Bolick, is in their early to mid 50s. That means — we have a mandatory retirement age of 70 years old. That means that this governor's influence is going to be apparent on the court for the least, the next 15 to 20 years. I think that's a big story in and of itself.

GOLDSTEIN: Well and that brings us back to the idea of adding the two justices, which is going to be even more impactful. Alessandra, generally, we knew that this was gonna be obviously a relatively conservative appointment. The fact that it is Montgomery and the fact that we know more of his record, does that necessarily mean he's going to end up being a more troublesome justice to progressives?

SOLER: Well you know, it's been interesting because the Supreme Court has generally been good on criminal justice issues. And Clint Bolick, Justice Bolick has been very, when we've appeared before the court on these issues, we've generally had favorable decisions. And so he's going to be one of seven, so it'll be interesting to see how that plays out. I mean I think the bigger concern for us now is the county attorney. I mean this is a very very important, powerful position. The county attorney decides who goes to prison for how long. And I think it's gonna be important for voters to really understand and demand a fair process.

GILGER: And as we look forward, Doug, to the future on the court like you're getting at here. I mean this is now an all-Republican court, I understand? Is that out of the ordinary and what might that mean? Both of you can tackle this, actually.

COLE: Well, no, it's not out of the ordinary. Back when Bruce Babbitt, the three-term governor here in the state, his Stanley Feldman was the longtime chief justice. That court was was very Democratic and was left-of-center. So you've had Governor Brewer with her six years in office, and now you're gonna have eight years of Governor Ducey. Between those two governors that succeeded Janet Napolitano, the overwhelming majority of all the courts that are on merit selection are going to be right-of-center justices, more conservative. That's just how the process works. Look, elections have consequences. The voters of this state voted Doug Ducey in in '14, and they re-elected him in 2018. And part of being governor is getting to make these these judicial appointments, and that's their legacy.

GOLDSTEIN: But let's pick at this a bit, we don't have a lot of time, but I want to pick at the Montgomery choice, Doug, because yes, Doug Ducey won re-election very easily. It seems like an odd calculation, though, when you consider he could have nominated some relatively anonymous judge who may have been just as conservative. Why would he delve into these waters? Is something going on behind the scenes? Are they closer than we thought? What's going on there?

COLE: Well I think, as with Justice Bolick, I think that he has a relationship with the county attorney, and he knows that these appointments are legacies, are legacy issues. And I think that he's comfortable with Bill, and he knows him well, and his record's out there for everyone to see, and he, like I said earlier, he's been nothing but consistent on the type of person he has put on the Supreme Court.

SOLER: I would think this is a textbook example of cronyism. And I think this is, what's interesting is that this is going to be — Montgomery has had national media attention for a lot of the policies that are coming out of his office. And so it's gonna be interesting to see if the media continues to focus that spotlight on him and see how he performs as a justice. But yeah, I would agree with Doug that the courts are generally, have been conservative, not just here in Arizona — across the country. And when it comes to a lot of the issues that we bring to them, they're generally going to be on the right side of history. And the courts understand, a lot of these, they're complicated legal issue.

GILGER: OK. So final question we probably have time for. There is now the matter of who will take Montgomery's place in the Maricopa County Attorney's office. Your organization, Alessandra, said this is an open race now. What kinds of qualities are you looking for?

SOLER: Well, we're looking for somebody that's gonna investigate prosecutorial misconduct. The Arizona Supreme Court has just said that one of Montgomery's chief prosecutors engaged in misconduct. So we want somebody who's going to be open and transparent is going to investigate misconduct and hold these prosecutors accountable. We want somebody who recognizes that there's a problem, that we need to reduce the number of people we send to prison. Arizona has one of the highest incarceration rates in the country. And Bill has been fueling that incarceration crisis by sending more people to prison for longer periods. We also want somebody who acknowledges that there are racial disparities in the criminal justice system and tries to make an effort to reduce those disparities.

COLE: All county officers are up next year, whether you're a supervisor or assessor or the county attorney or the sheriff. So Mr. Montgomery would have to run next year. In any case, I think the County Board of Supervisors are going to be very transparent in his appointment process, who replaces him. I think that they'll probably have some citizens group that they will put together, would be my anticipation, and vet candidates, and ultimately it's up to the five elected members of the County Board of Supervisors.

GOLDSTEIN: Alright Doug Cole with HighGround and Alessandra Soler, executive director of the ACLU Arizona. Thank you both.

COLE: Thanks for having us.