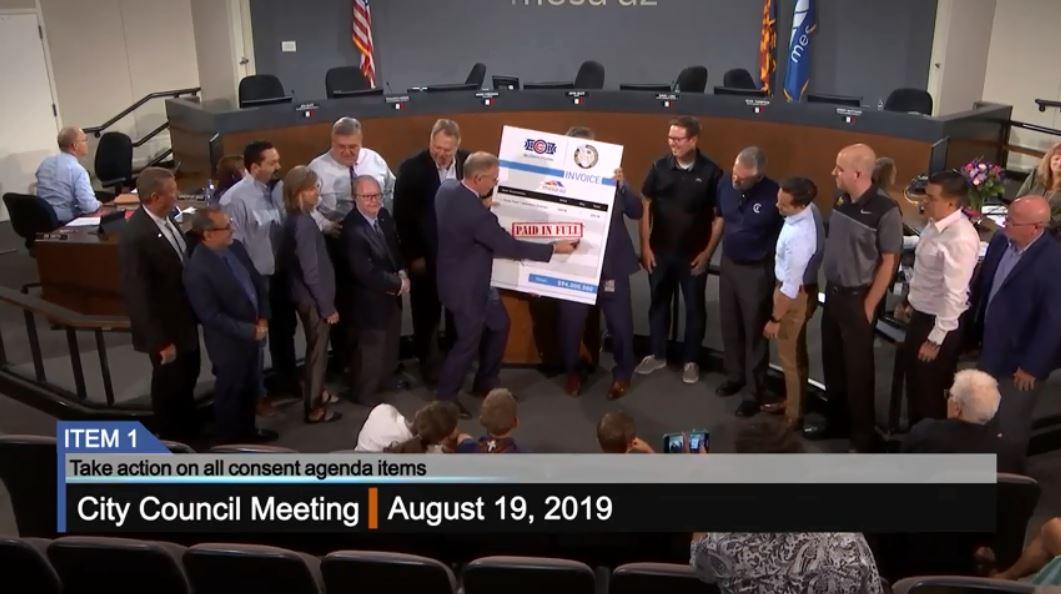 City of Mesa
Mesa Mayor John Giles signs an oversized invoice to symbolize the city paying off its debt on the spring training stadiums.

On Monday, Mesa’s City Council voted to pay off the debt incurred from renovating one stadium and building another more than a decade ahead of schedule, saving an estimated $22 million.

“It really is something very noteworthy for a city to own free and clear a stadium, let alone two stadiums, and do that ahead of schedule and do that in a way that saves a tremendous amount of taxpayer money,” Mayor John Giles said.

In 2013, Mesa issued $94 million in bonds to renovate Hohokam Stadium, where the Oakland A’s play, and build Sloan Park.

Arizona’s Legislature rejected an earlier plan to pay for the improvements with a regional tax.

“Many years ago in the mid-'80s, the city had purchased over 11,000 acres of Pinal County farm land and, during that time, we held onto it with the idea that we could use it for water rights,” City Manager Chris Brady said. “That never happened.”

The city struck a multiyear deal to sell the land to Pinal Landholdings LLC and netted $109 million for the sale and $25 million for a lease.