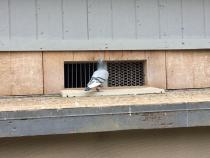 Mesa could soon join Phoenix and Tempe in restricting the feeding of wild birds.

The city’s Code Compliance Administrator Ryan Russell said even one person regularly feeding birds can cause a problem.

“You can get a huge number of pigeons and doves that come to that house and then the surrounding houses that they land on or roost at,” Russell said. “Then they leave their droppings on that, and it does create a health and sanitation issue.”

A proposed change to the city’s nuisance code would ban people from feeding wild pigeons and doves. The ban would not apply to domesticated birds like those used for shows, homing or racing.

The change is one of several nuisance code updates that will be presented to Mesa City Council on Monday, Aug. 19, at 5:45 p.m. A final vote is scheduled for Aug. 26.

Other proposed changes include:

“Most of our changes actually stem from citizen input,” Russell said.

Staff also recommend increasing fines for nuisance code violations from $150 to $250 for a first offense, and $250 to $350 for a second offense. Additional sanctions would remain between $500 and $2,500. Russell said these fees have not been updated in more than a decade.