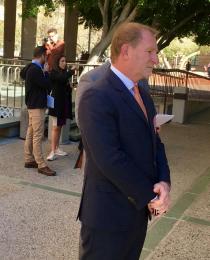 When the Phoenix Suns made a deal with the city to renovate the Talking Stick Resort Arena, the team’s owner pledged to build a practice facility.

An office complex on the northwestern corner of 44th Street and Camelback Road will be demolished to make way for the team’s practice facility. The 2.4 acre site will be used by the Suns and Phoenix Mercury. Right now, they practice at Talking Stick Resort Arena.

As part of the $235 million arena renovation deal with the city, Sarver said he would build a $25 million to 50 million practice facility. Having a separate location for players to practice should free up the city-owned arena for more events.

When the Suns announced the practice facility location in May, the team said a groundbreaking would take place this summer. The Suns did not respond to KJZZ’s request for a construction timeline and estimated opening by deadline.