LAUREN GILGER: OK Mark, you know what that sound means.

MARK BRODIE: I sure do.

GILGER: It means today we are kicking off our now-annual Monsoon Series.

BRODIE:  You know I do love a good rainstorm.

GILGER: And a good story.

BRODIE:  Of course and as we discovered on The Show last year, whether they love the monsoon season here or hate it, everyone has a monsoon story.

GILGER: I know I do, and I'm sure we'll get to that at some point in the series, but we kick off our series with the nitty gritty. The weather. So for that I sat down with Matt Pace — former TV news meteorologist, now with the Arizona Department of Environmental Quality — and I asked him to get a little weather-nerdy for us. How do monsoon storms form here? 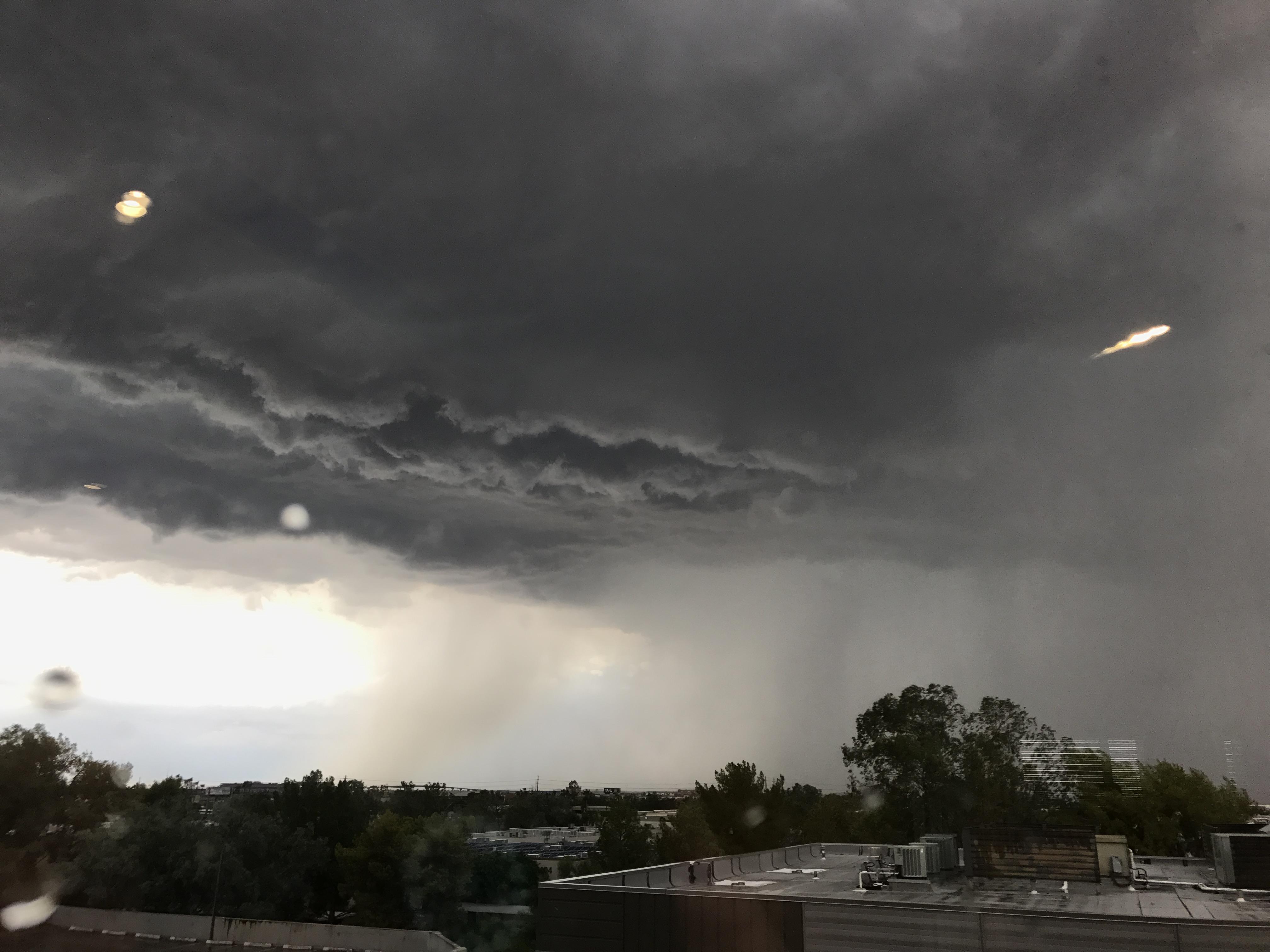 MATT PACE: So what happens is typically during the May-June pattern, there's a big area high pressure — that's basically sinking air and is rotating clockwise. So generally here in the Walley we have westerly winds because the high sitting down towards our south. During monsoon, what happens that moves up towards the north and sits generally right around the Four Corners. Still rotating clockwise, but now since that high's right over us, it's a lot warmer here in the Valley. So all that heat that generates, and since you are now shifting the winds out of the south, you get a lot of that moisture. It's able to interact with the heat. It's able to interact with all the mountains, and you form those thunderstorms that later move into the Valley.

GILGER: So it's literally a perfect storm then?

PACE: It is literally a perfect storm that has to set up, and all those ingredients have to come together to get rain down here in the Valley.

GILGER:  To get the rain. So monsoons are normally — in my mind — like, you see the big cloud form on the horizon, it sort of burrows in during the day and then comes home in the afternoon. You see the dust and then the rain. Why? Why does it come in that order?

PACE: So typically what you see with monsoon thunderstorms is they do form in those higher terains. You get that air that hits the mountains, and it goes straight up, able to interact with the moisture that's around the entire state. Then what happens is later in the afternoon, you get the flow coming off the mountains. So the storms literally drop off the mountain and then into the Valley. Now unfortunately, we don't a lot of the times have that same lift that you see in the mountains here over the Valley, so those storms collapse. And as they collapse, think of a lot of cold air rushing out of that storm. It hits the ground and spreads out in all directions. And that's those dust storms that start to move into the Valley. The good news with those is: those can interact over the Valley if you have a couple moving in and actually form storms instantaneously over the Valley. And that's when you'll look at one time, it's perfectly clear. You'll look out again, and there's a big storm just a mile away.

GILGER: Wow, that is crazy. And the way you're describing it, then, means that it is just incredibly specific to this place.

PACE: It is very specific to this particular region, the southwestern United States. And that's kind of the exciting thing because what happens is you never know where that first one is going to form. These storms are generally only about five square miles in size — incredibly small. So where's that one going to form? How's it going to impact a storm downwind of that one? Where's the dust storm gonna go? Where's that outflow going to go? So a lot of unique stuff comes into forecasting weather here in the Southwest U.S.

GILGER: It's got to be kind of fun for you guys.

PACE: Oh, it's fun. I mean, this is what we live for. We're always at the window seeing where those storms are forming. Driving home, you're looking, trying to figure out where everything is. So certainly a very challenging time but also a very exciting time for any weather nerds.

GILGER: So then let's talk about the results of monsoon season really. Do we bank on getting this kind of rain in order to keep our reservoirs where they need to be?

PACE: So one of the things that we do look at for when you're talking about the reservoirs is you get so much evaporation off those lakes as well that sometimes how much rain we get doesn't necessarily help to fill up the reservoir. For the of reservoirs a lot of the time we need that snowpack that happens in the winter months, and then that runoff is able to slowly melt and go into the lakes. So generally, since we're so warm, we have so much evaporation. This type of rain doesn't necessarily help or hurt our drought conditions.

GILGER: OK, but it does cool us off a little bit.

PACE: It does call us off. Unfortunately, this is the time of year when we can't really say it's a dry heat anymore. We'll start to see those dew points go up, and you walk to your car, and you can feel it is just hot out there.

GILGER: So weather in Phoenix is probably kind of boring the rest of the year, right? Are there other parts of the world where anything like this happens?

PACE: So monsoon season does happen in India as well. That's where they see a lot of the flooding rains, some of the same characteristics that we see here in Arizona. But it is very unique to the desert Southwest as far as the rest of the country is concerned, because you're thinking about these huge thunderstorms that develop literally in minutes and could drop inches of rain in just how isolated they are. For example, there was one storm last year where they received about two inches of rain and Sun City. Just down the street in Peoria, they got absolutely nothing. So it's pretty incredible to see this kind of pattern set up, and I think the other cool thing that happens during monsoon is people can see the storms form. They can see the lightning. They can see these 5,000-foot walls of dust start to move into the Valley because we have these nice vistas. You can just get up and look out, and I think that's one of the really unique things about weather here in Arizona is we can actually see it and experience it.

GILGER: Yeah yeah. That's so cool. So you were a weather man for a long time on the local news, you do this now you're still a meteorologist with the state. So what kinds of things do you hear from people? Like, what are the craziest stories you've seen?

PACE: I think one of the biggest things that almost everyone's going to ask you: "Is it going to rain at my house?" And during monsoon, we'll probably say there's a chance. Because that's all you can basically say during monsoon because again you never know where that storm is going to form. These storms are very powerful. They've been powerful for years. They'll continue to be powerful, and and I think that's one of the things that a lot of people are surprised about during monsoon, too, is just how powerful these storms can be. We're talking 50-60 mph winds, again inches of rain falling. And I think when you talk to people and put that into perspective, you start to see their face light up and be like, "I thought it was just tumbleweeds going down the street here in Arizona. You guys have weather." So it's always fun to see the excitement in people's faces when you talk about Arizona weather.

GILGER: Yeah. Okay, so this is public radio, Matt, so have to ask you the the abstract question here. But what do you love about these storms? I mean this is something you track. You know, you're dotting every i and crossing every t when you're reporting this stuff. What do you love about it?

PACE: I think the thing that I love about it the most, and this might seem strange coming from someone that forecasts the weather is it's very unpredictable. That you can't necessarily tell what's going to happen an hour from now. You'll put a message out there that "Hey, there's thunderstorms moving in. There's a chance of rain," and then absolutely nothing happens. Or you say "Yeah, there's 100% chance of rain, it's coming in," and you watch this storm move in and it just completely dissipates. So I think what I like is the unpredictability of the monsoon. It keeps us on our toes throughout the entire season.

GILGER: All right. That is Matt Pace a meteorologist with the Arizona Department of Environmental Quality. Matt, thanks for coming on.

GILGER: And remember, as part of our Monsoon Series what we want to hear from you. There are plenty of ways you can participate. Just go to monsoon.kjzz.org and find out how you can tell us your story. Or send us the best monsoon photo you've captured. Your story could end up on air, and your photo could be featured on our website.