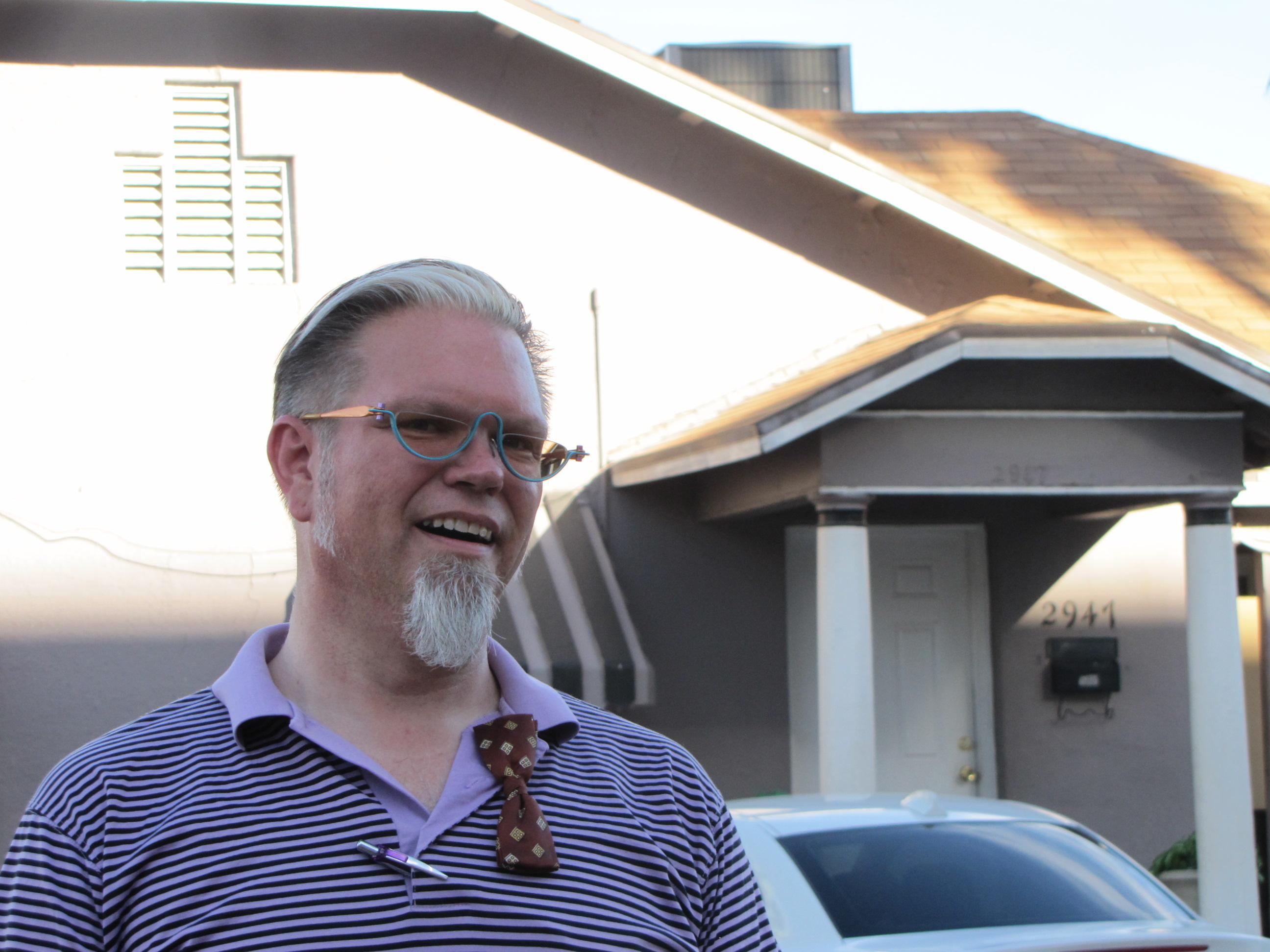 STEVE GOLDSTEIN: June is a vital time when it comes to recognizing the equal rights of the LGBTQ community in the U.S., and this month marks the 50th anniversary of the Stonewall Riots that got Pride parades and Pride month started in this country. Thanks to archival and more anecdotal research, a great deal more is being learned about how impactful gays and lesbians were in Arizona history — even as many of those residents weren't able to be open about their sexuality. The man known as "the hip historian," Marshall Shore has been working with a team from ASU to document the stories of the LGBTQ community. And he's with me to talk about his work. So Marshall, looking through the archives, what stands out about how Arizona was impacted by Stonewall in the late 1960s and early '70s?

MARSHALL SHORE: Well, I mean, you really find at that point you have a handful of bars that start opening up at that point. You finally have people who are tired of sitting in the shadows, even though it doesn't show up in newsprint for about another year here in Arizona. I mean, news traveled at a very different pace than it does now. And so took a while to get here, so it was more word of mouth. I mean, I've met people who didn't realize Stonewall happen until the 25th anniversary of it.... Just because there was no — I mean, it didn't show up on the nightly news. It didn't show up in the newspapers, so they didn't hear about it.

GOLDSTEIN: Was Arizona a place that was any less welcoming to people who were who were gay or lesbian?

SHORE: I would say it was probably equally hospitable. Probably not more nor less. Maybe, because of the Wild West nature, maybe a little bit more. But it's hard to say because, I mean, you still find all these things kind of hiding and it's like, "Oh my gosh."

GOLDSTEIN: Is there a point in time — from looking through the archives — that you were even surprised that maybe certain things were in the newspaper? Or were there, I don't know, euphemisms for things that may give people a clue as to maybe what was going on because things were not out in the open in the same sense? If there was something related to — someone was involved in a situation, and maybe there was some code word for "it happened in a situation where gay people were there" — or something like that?

SHORE: Well, it was interesting. One of the things I was surprised about was finding ads for Ray Bourbon and Lee Leonard, who were drag queens in the '50s. Ray Bourbon was a nationally famous drag queen and did performing here and in Tucson. And then Lee Leonard was from Phoenix, and I found an ad for him in Globe. I can't imagine performing drag at a bar in Globe in the '50s.

GOLDSTEIN: Right, I was even thinking before that, as a mining town, maybe you would have seen that. Perhaps, again, related to the Wild West.

SHORE: And actually we did. Actually, one of the first Hollywood celebrities was actually a drag queen. Basically his character was, he would show up somewhere as a man and almost always, like a birdcage, have a reason why he had to dress as a woman. Julian Eltinge. And so he built one of the first Hollywood mansions. He was in a dozen silent movies and also did stage productions and was here in Arizona on stage in Phoenix and Tucson but appeared on movie screens all over the state.

GOLDSTEIN: Did white males dominate when it came to knowing about news about people who were gay or whatnot? Is there a lack of knowledge about the diversity around that?

SHORE: There is. And that's because of the media. Because it was reporting on basically white men. And so, when you start looking at marginalized communities, their stories don't necessarily make it into that print. Also, what winds up happening is it's very negative. Until the mid-'70s, you don't have LGBTQ press by the community for the community. Until then, it's general press basically talking about the community. And so it's really those extremes that they wind up talking about, not just "Hey, you know, so-and-so is having a party." But it's like, "Oh, there was an arrest here; this was going on." And in the '70s that start changing a little bit. But it was still very white-centric.

GOLDSTEIN: Was the history less preserved because of the specter or whatever over being able to be out in the open about these things?

SHORE: Well, and it was such a close community. It was like, you would find it was really popular to have house parties. So that way, all the folks that were there were already vetted. It's like you didn't have to figure out "OK, who's here? Who's not here?" Boom, everyone at this party is a friend. With that, that community stays in those photo albums. Like recently, chatting with a gentleman who is now 93, we were talking about an artist — George Quaintance. George Quaintance was the art director for a lot of those muscle magazines in the '50s. And he did a lot of that from right here in Phoenix, at his house. And we were chatting about him, and he's like "Well, you know, he never painted me," but this guy start rummaging round his coffee table and found this little 1-by-2 photograph of a guy named Joe from Prescott standing next to this young man in drag. He's like, "Oh, this is one of George's boyfriends," and it was so shocking to see that photo because both the men are Hispanic. And so, trying to get some of those stories is fairly difficult, and now to have a photo. Now we have a name, so I just got that last week. So it's trying to figure out, OK, so now let's see what I can find out about the guy that we do know his name of.

GOLDSTEIN: Wow, this is such an obvious question but I have to ask it anyway: why is it important for this to be more available, more open, increasing the knowledge of people generally?

SHORE: Well, it's interesting. I did a program recently at a library, and there was a 15-year-old young man in the back. And, after everyone was done, he came up and he was like, "You know, I thought is going to be a boring program because Arizona, what would be here?" And he said he was shocked to find out his home state had so much LGBTQ history right here. And so, I'm sure he then ran off and told his friends because he thought it was just this small piece of history, and finding out that there's this huge swath of history. So it gives a better context for where he's at. There's also this element of you're not alone. Other people have been here, they've survived through this, you will do the same. As well as that understanding element of looking at the comedian realizing, "Oh, it's been here for a while." I've got a young friend who his parents are like, "Oh, you know, you're just this way because it's a fad. It's a it's a new thing." No actually, even within Arizona, we can look at it really far back.

GOLDSTEIN: Marshall Shore is the "hip historian." He's working to document the stories of Arizona's LGBTQ community over the course of the state's history.