EDITOR'S NOTE: The end of this story contains a graphic photo depicting a dead man and child. Viewer discretion is advised.

LAUREN GILGER: But we begin with news from the border. You may have already seen the haunting image of a father and his 23-month-old daughter lying face down along the banks of the Rio Grande River. They drowned attempting to cross from Mexico into Texas. They were from El Salvador. The photo underscores the difficulty the United States faces as we attempt to address the near-record numbers of immigrant families seeking asylum here. While the focus has been on Texas this week, our next guest says Arizona is also seeing more children separated from the adults they cross the border with, and the upsetting conditions seen in Texas holding facilities can be found here as well. Golden McCarthy is an immigration attorney and children's program director with the Florence Immigrant and Refugee Rights Project. Golden, the photo is graphic and upsetting, but is it surprising to you? 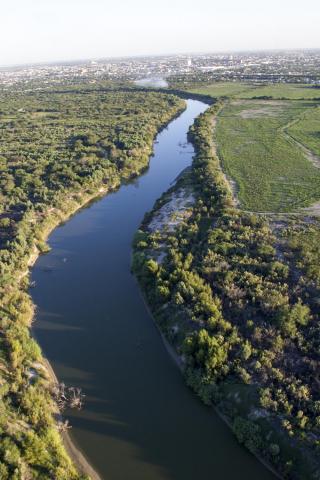 U.S. Customs and Border Protection
An aerial view of the Rio Grande River border area in Texas in September 2013.

GOLDEN MCCARTHY: I mean, it is surprising. I think it's like a devastating situation that happened. What is concerning is that I think that we will see more of this because as people are being forced to wait on the other side of the border they are being metered in slowly. Individuals are waiting months to enter the United States to claim asylum. And so it's becoming dangerous in Mexico at the ports of entry. And it really is pushing people into dangerous decisions, right? Either wait at the port of entry in line to be metered in — which can last at this point four to six months — or you try to bring your child in through other means. And we see that in Arizona through the corridor, the mountains, and we are hearing of children and families crossing through dangerous terrain. The heat right now in Arizona is incredible. And to be in the desert in the daytime. There are also animals. Clients have told us about coyotes and wolves snakes and then also there are individuals hiding out in the mountains who are there to rob them and create even more danger for those crossing. So I think it's incredibly devastating to see that image but it also is something that I think we need to recognize as what people put themselves into when they have no other option.

GILGER: So the Florence project has been sort of at the forefront of this child separation crisis since the beginning. You were one of the first ones to file a complaint about this. You noticed it before the policy was official — the zero tolerance policy. What are you seeing now? Is this still happening?

MCCARTHY: Yes. We're still seeing children being taken away from their caretakers by Border Patrol. We are not seeing at the high levels that we did the summer of 2018, but we are seeing it, and we are starting to see more of it. Currently we are representing 35 children who have been removed from either their biological parent or their legal guardian.

GILGER: The Trump administration said that they would end this practice. What are they doing now? This is not necessarily separating children from their parents this is separating them from another family member they traveled with?

MCCARTHY: It's both. And so what I believe is happening is that there's a caveat in the policies that say if Border Patrol believes there is a danger to the child or there's a criminal history of the adult, then they can separate. It's giving Border Patrol a lot of discretion to make that decision. And so what is difficult for us — because we typically represent the children — is figuring out why Border Patrol separated them. Many times our clients don't really know why. And some are so small that they weren't able to understand the point at separation, right? They merely said, "An agent came in. He said I can't be with my dad anymore. And they took my dad away." So we are trying to work backwards to figure out what happened at that point and whether or not it was a lawful separation as the policy dictates. Regardless of that, it's incredibly traumatic. The children are going through a situation where they don't understand where their adult caretaker is. They are scared, and they're alone in this process. And so it has been really difficult to work with our clients to try to you know do the things that we do which is represent them in their immigration removal proceedings case.

GILGER: How young are the children that you're working with?

MCCARTHY: We have clients as young as three currently. But then the age runs the spectrum all the way up to 17 years old.

GILGER: So there are also stories this week about reports of children being held in Border Patrol facilities in pretty horrific conditions without the necessities, the basics — diapers food etc. Is this happening border-wide? Is this something that is not surprising to you either?

MCCARTHY: It is surprising under the Flores settlement, they're only allowed to detain the children for up to 72 hours and then pass them to an agency called the Office of Refugee Resettlement. Our clients are telling us that they are being held there for more than 72 hours — in some cases up to 14 days. Our clients are coming to us sick. They have colds. They have runny noses. They have fevers. They are telling us stories that they had limited food while they were in there, that they were cold, that they did not have access to water at certain points or to the bathrooms. So we are very much concerned about what's happening in these processing facilities.

GILGER: The immigration system does seem to be overwhelmed right now, though, with the number of migrants coming to the border and seeking asylum reaching near-record levels in the last decade. Last night the House of Representatives passed a bill authorizing $4.5 billion in humanitarian aid to the border. Is it enough?

MCCARTHY: I hope so. I hope it moves forward. What I can say is that children should not move through an immigration removal proceedings without an attorney, and part of that funding dictates whether or not children get attorneys. And the Florence Project is dedicated to making sure that no child enters court alone. We don't think that's an appropriate thing. No other court system in the United States where children are participating denies a child an attorney. So we do all that we can to make sure that every child is represented. I will say that historically, the immigration system has been built for single adults. And what we're seeing here are families coming through and unaccompanied minors. So it is a different population than what the immigration system has been built for. That doesn't mean that we lose our humanity or that we treat people without care and respect. It just means we have to be more flexible and figure out other ways of working with them while still maintaining their dignity and ours.

GILGER: So so humanitarian aid is one thing. What else would you like to see happen? Is this about requiring representation for kids in immigration court? Is this about more immigration judges? What do you think would really help the situation at this point?

MCCARTHY: I I truly believe that people want to avail themselves of the protections in the United States. When our clients reach out to us or tell us their stories, they are fleeing persecution. They are fleeing danger in their home countries. If if an individual has an attorney, whether they're a child or an adult, they get access to tell their stories to a judge in a meaningful way. And what I think is most important is that they get their day in court as is dictated by the law and due process. The Florence Project is there to ensure that that happens. It can be an incredibly complex system to navigate, especially those with limited English and especially with those who don't even really understand the abstract concepts of court. So to have an attorney is going to help everybody move the process through in an efficient but also humane way.

GILGER: All right. Golden McCarthy is an attorney and the children's program director with the Florence Immigrant and Refugee Rights Project. Golden, thank you for joining us.

MCCARTHY: Yeah. Thank you so much.

A searing photo of a man and his 23-month-old daughter who drowned in the Rio Grande underscores the perils of the migration crisis on the U.S.-Mexico border. https://t.co/y8GmQRth4L