Arizona Board Of Education Declines Changes To Sex Education Policy 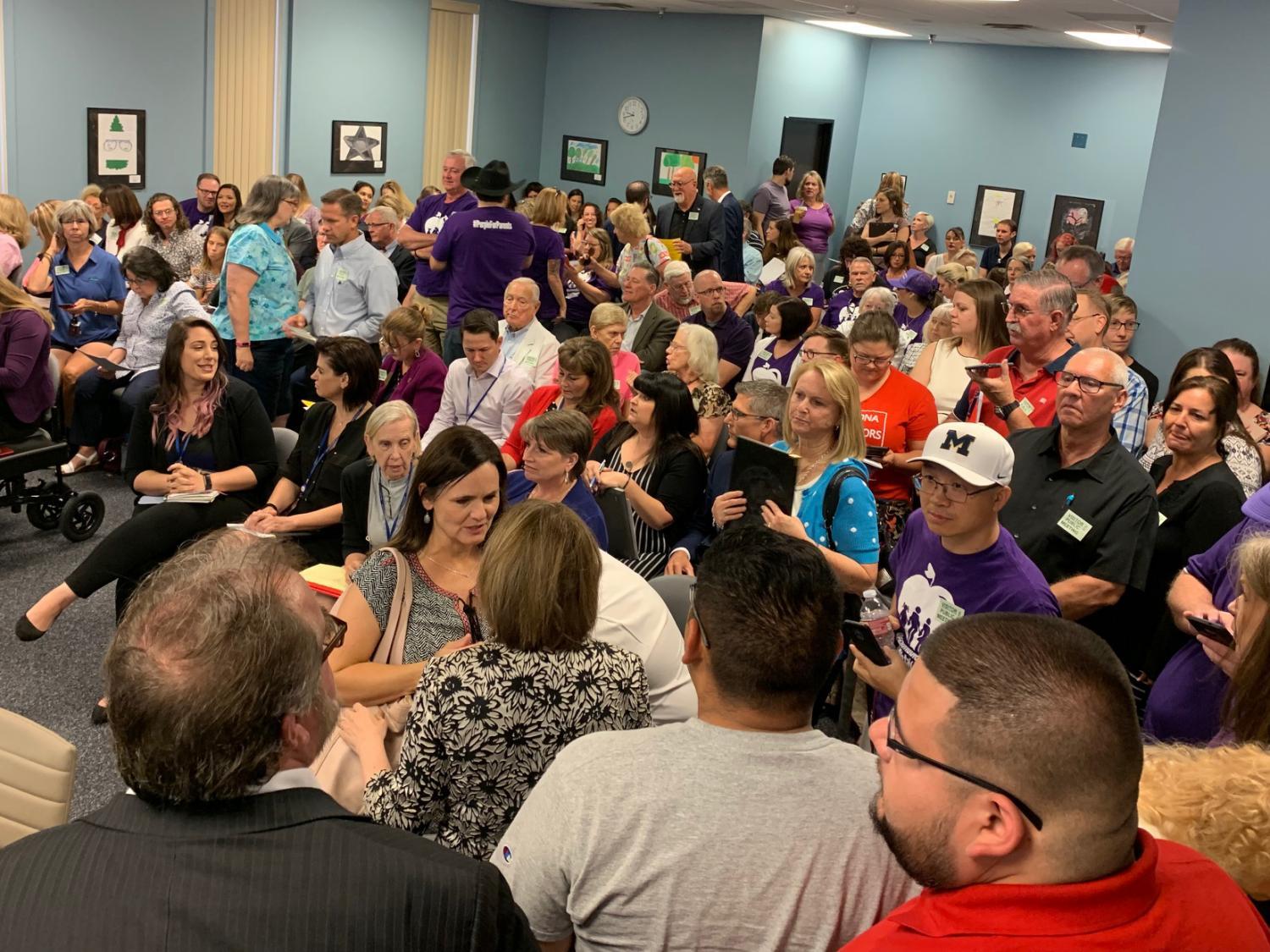 Mariana Dale/KJZZ
The State Board of Education was at capacity on Monday, June 24, 2019, three overflow rooms were opened to accomodate everyone.

The Arizona State Board of Education voted Monday not to consider changes to its sex education policy for the state’s public schools.

“The rise of STDs and STIs is a concern for me,” said Superintendent of Public Instruction Kathy Hoffman, referring to sexually transmitted diseases and infections. “I’m also concerned about bullying in our schools and that there’s been a long history of stigmatization of our students in the LGBTQ community.”

More than 200 people attended Monday’s meeting, filling the board room and three additional overflow rooms at the Arizona Department of Education, and speaking for close to four hours during public comment.

What Was Being Considered?

The board considered opening rule-making on its sex ed policy, meaning changes could be made after the board heard from the public, possibly multiple times.

The board was not voting on specific changes to policy Monday.

Superintendent Kathy Hoffman asked the board to consider changes after receiving a letter from Sen. Martin Quezada, Phoenix Democrat.

In regards to format of sex education instruction, “lessons shall MAY be taught to boys and girls separately.”

“All sex education materials and instruction shall be age appropriate, recognize the needs of exceptional students, meet the needs of the district, recognize local community standards and sensitivities, shall not include the teaching of abnormal, deviate, or unusual sexual acts and practices, BE MEDICALLY AND SCIENTIFICALLY ACCURATE.

Stress that sexually transmitted diseases INFECTIONS have severe consequences and constitute a serious and widespread public health problem, AND PROVIDE MEDICALLY ACCURATE INSTRUCTION ON METHODS TO PREVENT THE TRANSMISSION OF THESE INFECTIONS;

Hoffman said she considered the changes as “small” and “not drastically changing sex education in Arizona.” 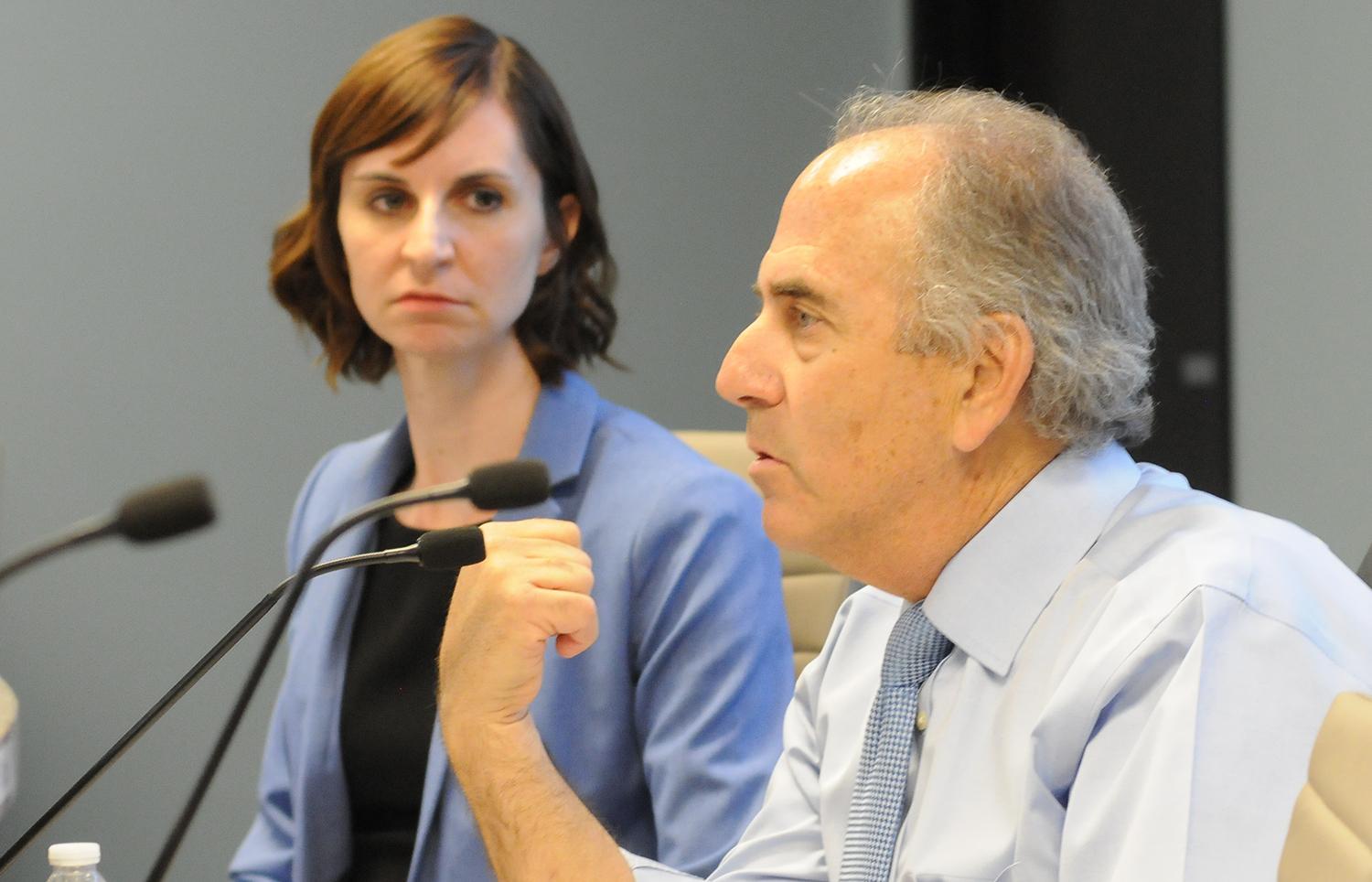 Howard Fischer/Capitol Media Services
Luke Narducci, president of the Arizona State Board of Education, with Superintendent Kathy Hoffman on June 24, 2019.

What Did People Say?

The Board of Education heard from about 60 members of the public. Most opposed prospective changes to the sex education policy.

“As much as possible our schools must remain neutral on moral and political issues,” Allen said.

Allen said children with “gender identity confusion” should be protected.

“Schools are not the leaders in solving complex social problems,” Allen said.  it is families that should take the lead while schools give support.”

Allen blocked changes to Arizona’s sex education policy as chair of the Senate Education Committee for the last four years.

Veronica Corcoran, one of several people who was concerned changing the sex education policy would sexualize children:

“When children grow up they will automatically know how to act on their God-given rights for intimacy, sexuality and reproduction,” Cocoran said.

Scott Weinburg, the parent of two children in the Kyrene School District:

“The role of educators and policy makers is to ensure a free and appropriate public education for all students that includes members of the LGBTQ-plus community,” Martin said.

Madeline Adelman, co-founder of the GLSEN Phoenix Chapter, an education group that advocates for LGBTQ students:

“The proposed rule changes enhance the safety and health of Arizona students in several simple and distinct ways,” Adelman said. For example, giving schools the option to teach some co-ed sex education classes.

“There’s lots of reasons this could be a good option for some students, including students learning to be respectful in their communication with each other around people who have different bodies and different ideas,” Adelman said.

“Why can’t we strengthen what is taught through individual parent participation?” asked She recommend a mandatory, parent-supervised portion of sex education.

Alma Engel said sex education should be limited to “traditional biology,” and called homosexuality an “abnormal an unsafe lifestyle.”

Frank Lister, a substitute teacher, said in his generation, health wasn’t taught in the classroom.

“I ended up with five kids, so I learned something,” Lister said. “If you know nothing, get married, think of the fun you have experimenting.”

Why Is This Happening Now?

In April, Arizona lawmakers repealed a portion of Arizona’s law that restricted discussion of LGBTQ relationships in school health classes in response to a lawsuit.

Following that, the Arizona Board of Education eliminated rules requiring sex education to "promote honor and respect for monogamous heterosexual marriage'' in May as part of settling the lawsuit.

Board member Armando Ruiz voted no on those changes and said Monday the catalyst for new changes should be the Legislature.

Declining to open rule-making essentially eliminates the possibility the Board will consider further changes to statewide education policy anytime soon.

“I think there is a lot of interest in working on sex education topics, but I think we need to have more stakeholder engagements and parent involvement,” Hoffman said after the meeting.